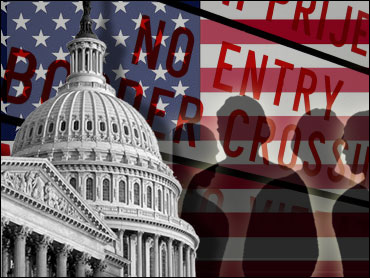 
Here's the "clean little secret" about immigration: For all the noise from the right side of the Republican Party and the left side of the Democratic Party, most Americans want immigration reform, want some kind of guest worker program, and want some way for illegal immigrants to apply for legal status.

Actually, it's no secret — those were the findings of a recent CBS News/New York Times poll.

But you'd never know it. The Right and the Left turned up the volume and drowned out the center. When the Democratic leader in the Senate was unable to cut off debate and bring reform to a vote, the blame game began.

Republicans said the bill could have passed with a few more changes. Democrats said Republicans were trying to kill the legislation with amendments. All sides blamed the President's poor relations with Congress.

Excuse me, but when has the President ever had good relations with Congress?

I've never been one to question motives, but I have to wonder: Is this what both sides secretly wanted?

As important as it is, no politician gains much by supporting reform. To the contrary, support guarantees well-financed attacks from both the Right and the Left. Doing nothing left senators in the best place of all — they could all blame each other and head for the next fundraiser.

The problem is, the problem is still there. The loudest voices prevailed and Congress demonstrated yet again that it could not muster the political will to confront a major problem head-on and resolve it.