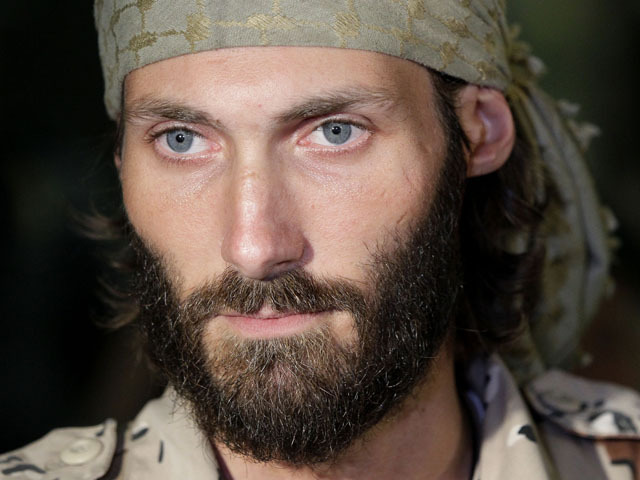 LINTHICUM, Md. - An American writer who went missing in Libya for months returned to the United States on Saturday night, telling reporters he went to the Middle Eastern nation to participate in the uprising against dictator Muammar Qaddafi and was on a reconnaissance mission when he was captured.

Matthew VanDyke was met by dozens of friends and relatives and members of the media when he arrived at Baltimore-Washington International Thurgood Marshall Airport.

Earlier this year, the 32-year-old VanDyke was working in Baltimore on a book and film about a motorcycle trip across the Middle East and southeast Asia when he decided to witness the uprising in Libya.

He disappeared during a day trip to Brega in March and wasn't heard from until he was freed from the infamous Abu Salim prison in Tripoli in August. After he was freed, VanDyke said he'd remain in Libya until Qaddafi fell from power and he later joined rebel fighters.

VanDyke's mother, Sharon, and his girlfriend, Lauren Fischer, held strong to their belief that VanDyke would return. Sharon VanDyke even traveled to Turkey with photos of her son in hopes of speaking to Libyan diplomats in hopes they could work to free him.

Sharon VanDyke and Fischer enlisted Rep. C.A. Dutch Ruppersburger, a Maryland Democrat and ranking member of the House Intelligence Committee, who held a news conference in May to call attention to the situation. Libyan officials initially denied VanDyke was being held, but in July they acknowledged he was in custody.

When the Abu Salim prison in Tripoli was bombed in August, fellow prisoners broke open VanDyke's cell and he escaped. The fleeing prisoners made their way to a compound, where he was able to borrow a phone to call home.

VanDyke recounted his time in prison in an interview with The Associated Press after his escape. He said he was captured in an ambush by government troops in March in the town of Brega. He said he was then held in solitary confinement but was never told what he was accused of or if he would be released.

VanDyke later joined rebel fighters and now, on Facebook, he describes himself as a soldier in the Ali Hassan al-Jaber Brigade of the National Liberation Army of Libya. His mother has said she was nervous about him fighting, but supported his decision.