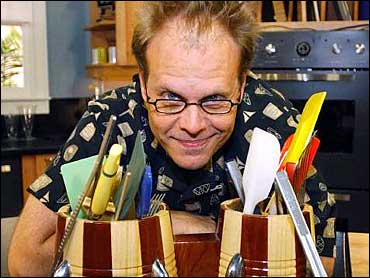 TV personality and cookbook author Alton Brown is visiting The Early Show Thursday to talk about good, regional American road food. He recently hit Route 50 on his motorcycle and you can see what he finds on his latest show on the Food Network, "Feasting On Asphalt." The series premieres on Food Network Saturday, July 29, 2006.

The recipes he's preparing on The Early Show are simple, done using the cigarette lighter in a SUV.

Brown, who will turn 44 on Sunday, July 30, is the creator and host of the television show "Good Eats" on the Food Network. He is often described as a culinary version of Mr. Wizard or Bill Nye because he takes a scientific and humorous approach to his cooking shows. Bon Appétit magazine named him "Cooking Teacher of the Year" in 2004.

He is the main commentator on the show "Iron Chef America," an American adaptation of the Japanese series "Iron Chef." Brown is also a regular contributor to Bon Appétit and Men's Journal magazines.

Nigeria's Lagos shut down after at least 12 protesters killed