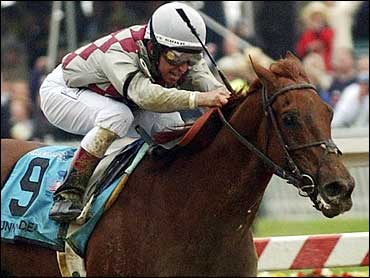 For the fifth time in seven years, a thoroughbred will enter the starting gate for the Belmont Stakes poised to claim horse racing's most coveted prize – the Triple Crown.

Yet this year's example of equine excellence, Funny Cide – along with his human connections – seems to have generated an added spark of electricity for a sport that has seen interest wane in the 25 years since the last Triple Crown champion, Affirmed, won the Kentucky Derby, Preakness and Belmont Stakes in 1978.

The added interest comes from numerous factors. There's the horse, of course. Funny Cide has already made history. He's the first New York-bred to win the Kentucky Derby and the first gelding to challenge for the Triple Crown, won by such great colts as Whirlaway, Citation, Secretariat, Seattle Slew and Affirmed.

"We have a horse that's captured the imagination of the public and not just in New York — in the entire country," says Bill Nader, senior vice president for the New York Racing Association. "He's sitting on the doorstep of immortality. It doesn't get any better than this."

But it's not just the horse that has America hooked. It's his story. He cost $75,000 — cheap by thoroughbred standards; he's a gelding bred in New York; and his trainer Barclay Tagg has toiled for decades in near-obscurity.

"We do represent probably 90 percent of the class that's out there, you know. It's the working class," said part-owner Mark Phillips.

"None of us ever thought we'd be here," said Jack Knowlton, general partner of Sackatoga Stable who's been the point man for the horse's owners since Funny Cide won the Kentucky Derby. "It's been very special for us. Sackets Harbor will never be the same."

Knowlton and his nine partners, a group of fun-loving fellows — six are high school pals from Sackets Harbor, N.Y. — chipped in $5,000 apiece eight years ago to start their modest stable.

Some are retired, one's a math teacher, another's an optician; others work in construction, catering or retail. One partner, Gus Williams of Saratoga Springs, N.Y., wears wild-colored sports coats and carries a business card that lists himself as a "Professional Italian." No princes or sheiks in this group.

When their unheralded gelding wowed the world in the Derby, even the Sackets Six was stunned. They couldn't even find the winner's circle.

"We started down saying, 'We got a winner.' And everybody else said, 'Well, we bet on Funny Cide, too. We got a winner,'" Phillips said. "And we said, 'No, you don't understand. We're owners. We are winners. We gotta get there!'"

Tagg toiled 32 years with moderate success before he found Funny Cide on a farm in Florida. He's no Bob Baffert or D. Wayne Lukas, that's for sure.

And Santos' career has been reborn after years of problems with drugs and injuries. He also became the sympathetic figure in this tale after a photograph raised questions about whether he may have carried something other than a whip in his hand while winning the Derby. He was cleared of any wrongdoing.

"The whole story is why America loves him," Tagg's assistant Robin Smullen said this week. "The story about paying $75,000 for him, him sort of being the underdog, and it's the ninth horse these people have ever owned. It's all that more than it is actually Funny Cide.

"But, of course, it's because of Funny Cide."

At Belmont Park, were rain was forecast for race-time, there's a sign at the front gate welcoming race fans to Funny Cide's home track, grooms and hotwalkers are strolling around the backstretch wearing "We Love Funny Cide" buttons, and artist LeRoy Neiman showed up one morning to begin work on a Funny Cide portrait.

Even trainer Bobby Frankel, who will send out Empire Maker to try and spoil the party, is paying attention.

"You got a New York bred, and you got a gelding," Frankel said. "And you got guys (owners) I read about the other day that I was interested in. Racing needs things like this. Even the Santos thing, bad or good, gets people thinking about racing."

Santos threw out the ceremonial first pitch at Yankee Stadium on May 27 — 10 days after winning the Preakness. Triple Crown sponsor Visa will pay Funny Cide's owners a $5 million bonus if the horse wins the Belmont. The owners have set up a Web site, funnycide.com, and created Funny Cide Ventures.

Letters are arriving, too. Hundreds, in fact, Tagg said. Among the latest was one from Penn State, where Tagg earned a degree in animal husbandry.

"Joe Paterno wrote a letter, and he's somebody I hold in the highest esteem although I never met the man," Tagg, 65, said of the Penn State football coach.

Saratoga has long been known as racing's Mecca, and the unofficial headquarters of Funny Cide mania has gone bonkers for the horse born in town at Joe and Anne McMahon's farm.

Still, not everyone's jumping on the Funny Cide bandwagon.

"Racing needs this horse to go over there and get beat, then we'll get 140,000 next year," Lukas, who'll saddle Scrimshaw in the Belmont, said. "If he doesn't do it, it'll build the crescendo and the hype and the mystique that we've developed."

That's why Lukas and other industry experts believe going decades without a Triple Crown winner is a good thing.

"Every year it's better if you come in with two-thirds of a Triple Crown and the excitement is there," Frankel said. "If it happened too often, then it wouldn't be that big a deal."

Still, the detractors seem to be few and far between.

Because when you put the pieces together, it's easy to see why so many fans will be rooting for Funny Cide to win the Triple Crown.