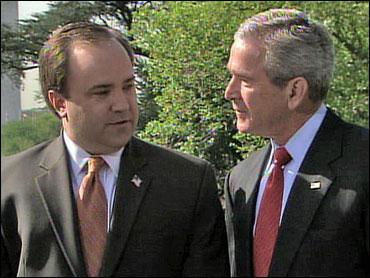 The Bush administration employed propaganda techniques, political spin and deception to promote and then justify a war with Iraq that was unwise and unnecessary.

And a "too-deferential" national press corps allowed the president and his aides to get away with it.

Who makes this devastating, if not entirely new, charge?

In a memoir that will be published Monday, "What Happened: Inside the Bush White House and Washington's Culture of Deception", the veteran campaign and White House aide to George W. Bush portrays his former boss and those around him as permanent campaigners who frequently sacrificed the good of the country to achieve dubious political and policy goals.

But nowhere is the former press aide so devastating in his critique of his former boss as on the issue of how the United States was steered into the quagmire that is Iraq.

Bush, he writes, is guilty of a "failure to be open and forthright on Iraq and (of) rushing to war with inadequate planning and preparation for its aftermath."

Accusing the president of engaging in "self-deception" when it came to the facts from the Middle East, McClellan explains that Bush "and his advisers confused the propaganda campaign with the high level of candor and honesty so fundamentally needed to build and then sustain public support during a time of war."

"[I]n this regard, (Bush) was terribly ill-served by his top advisers, especially those involved directly in national security," argues McClellan, who is blistering in his description of Secretary of State Condoleeza Rice, the president's former national security adviser, as "too accommodating" and too concerned about protecting her own reputation to challenge strategies that she had to know were ill-advised and dangerous.

And what of the free press that is supposed to serve as a watchdog on executive excess and deceit?

"If anything, the national press corps was probably too deferential to the White House and to the administration in regard to the most important decision facing the nation during my years in Washington, the choice over whether to go to war in Iraq," the former spokesman writes. "The collapse of the administration's rationales for war, which became apparent months after our invasion, should never have come as such a surprise. … In this case, the 'liberal media' didn't live up to its reputation. If it had, the country would have been better served."

McClellan, Bush's traveling press secretary during the 2000 campaign and a former deputy press secretary to the president who served as White House spokesman from 2003 until 2006, is blunt and detailed in discussing administration efforts to destroy the reputation of a critic of the rush to war, former Ambassador Joe Wilson (and Wilson's wide, outed-CIA agent Valerie Plame).

"I had allowed myself to be deceived into unknowingly passing along a falsehood," he writes of his defenses of key players in the scandal such as White House political czar Karl Rove and fellow White House advisers Elliot Abrams and I. Lewis 'Scooter' Libby. "It would ultimately prove fatal to my ability to serve the president effectively."

While Bush, too, may have been deceived, McClellan explains that "the top White House officials who knew the truth -- including Rove, Libby and possibly Vice President Cheney -- allowed me, even encouraged me, to repeat a lie."

That lie, and the others related to the war, are the bitter legacy McClellan wrestles with in an agonizing account of the White House in which he served. That account will serve as an essential document of the Bush presidency, and of the current campaign to replace it.

Above all, however, McClellan's book is a cautionary tale that reminds us that powerful men and the governments they guide must never be allowed to wage wars of whim.

"History appears poised to confirm what most Americans today have decided: that the decision to invade Iraq was a serious strategic blunder," he writes. "No one, including me, can know with absolute certainty how the war will be viewed decades from now when we can more fully understand its impact. What I do know is that war should only be waged when necessary, and the Iraq war was not necessary."
By John Nichols
Reprinted with permission from The Nation