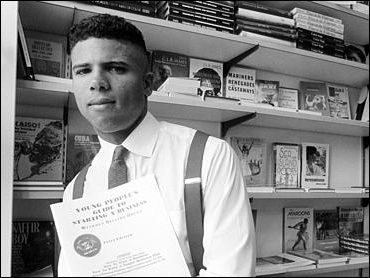 A man accused of trying to help al-Qaeda set up a terrorist training camp in Oregon pleaded not guilty Monday to conspiracy and weapons violation charges.

James Ujaama, 36, didn't speak during the brief court hearing except to say that he understood the charges

Ujaama was indicted Aug. 29 by a federal grand jury in Seattle on charges of conspiracy to provide material support and resources for al-Qaeda - Osama bin Laden's terrorist network - and with using, carrying, possessing and discharging firearms during a crime.

The indictment contends Ujaama, a Muslim who was born James Thompson, led a conspiracy in 1999 to set up a training camp in Bly, Ore.

Ujaama was born in Denver and grew up in Seattle, where he worked as a community activist. He was arrested in Denver on a material-witness warrant July 22.

Attorney Peter Offenbecher said his client "steadfastly has maintained his innocence." He refused to comment further.

Among the items the FBI seized from the house in Denver where Ujaama was staying were five books on Islam, including one titled "The Virtues of Jihad," according to prosecutors.

The list of items taken from the house was filed Monday in federal court in Denver by prosecutors arguing against returning the materials to Ujaama and his brother Mustafa.

Mustafa Ujaama has not been arrested but has filed a motion requesting the items back.

The other books seized July 25 include, "Write Your Islamic Will" and "Taliban." The list was compiled by a federal agent and it was unclear whether the books were in English.