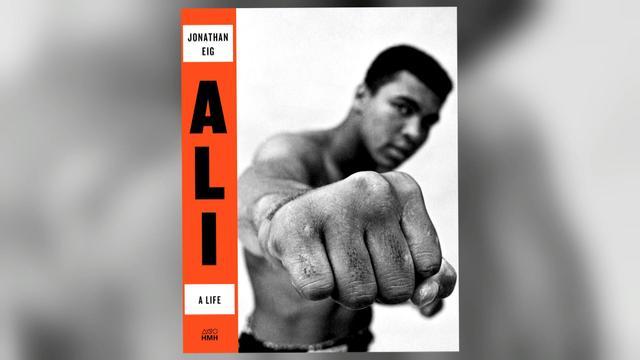 Cassius Clay exploded onto the scene in 1960 as the audacious boxer known as "The Louisville Lip." Clay would go on to change his name and the course of American history -- first as an Olympic and heavyweight champion and in later years as a civil rights activist, anti-war crusader and eventually a beloved figure who valiantly fought Parkinson's disease.

The brash young athlete who emerged in the early 1960s was quick, charismatic and what one writer called "Harry Belafonte with muscles."

In the book, Eig writes that "the boxer, born Cassius Clay, the dyslexic son of an abusive father, was just looking for a way to fight back."

The boxer's declaration "I am the greatest" became some of the most important words of the civil rights movement.

"That alone was a radical act. For a black person to say he was the greatest, and it became a real rallying cry, you see the black power movement adopting that," Eig said.

"Lingering behind those words," wrote Ebony magazine, "is a blast furnace of race pride."

They were all wrong. And the day after he beat Liston, Clay startled the world again when he announced his conversion to Islam. He was now Muhammad Ali.

"He heard it directly from these white businessmen who were managing his career. And they said, 'You're killin' us. You know, we had Coca-Cola offers on the table.' After he declared that he wouldn't fight in Vietnam, it got even worse. Then he was banned from boxing and couldn't get a fight anyway, against anybody," Eig said.

His reputation would take yet another turn.

"I think the big change comes in 1971, when he fights Joe Frazier -- the fight of the century, Madison Square Garden. He's been in exile. He was banned from boxing. He was the most hated man in America and he's finally allowed to fight again. And by now, by 1971, our views on Vietnam have changed and he gets in the ring with Joe Frazier and he gets whooped. He gets knocked flat on his butt and gets up again. And I think that moment, when he gets up, is the moment when people begin to feel differently about Muhammad Ali," he said.

But the pounding Ali was taking in the ring -- according to Eig's research, he took more than 200,000 punches over the course of his career -- was already taking a toll. His own team saw it early on.

"Shockingly early. His fight doctor, his ring doctor Ferdie Pacheco told me that he saw damage as early as 1971. The changes in his speech, in his ability to pay attention. And he saw it after the very first Joe Frazier fight, and that he never recovered from that," Eig said.

Eig worked with scientists at Arizona State University to study Ali's speech as an indicator of cognitive damage.

"From 1970 to 1980, when he's still fighting, at the age of 38, his speech declines by 26 percent," he said. Eig explained the speech decline was evidenced by the number of syllables per second he spoke.

The reason he kept fighting? Money, according to Eig.

"He saw it, too. Ali talked about it. His wives, his parents came to him and said, 'We can't understand what you're saying. You're mumbling. What's wrong?' He was concerned about it, but he still kept fighting," Eig said.

While Ali is held in history as almost a mythic figure, Eig wanted to show his human side, too.

"You sometimes get the feeling that he's the Dalai Lama, the way the media treated him toward the end. And that wasn't the case. He was a deeply flawed person. We don't do him any kind of service by making him into this two-dimensional, mythic figure. I wanted him to be real. I wanted readers to understand what he really was like."