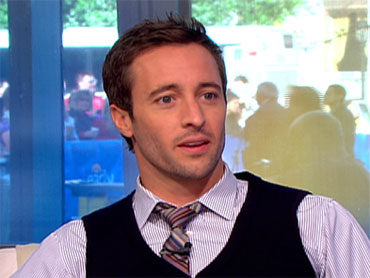 Alex O'Loughlin, 33, left his native Sydney a few years back to headline the television series "Moonlight," and the later medical drama, "Three Rivers." This month, O'Loughlin is starring opposite Jennifer Lopez in the romantic comedy "The Back-Up Plan."

O'Loughlin stopped by "The Early Show" Thursday to discuss the film and what it was like to work with Lopez. O'Loughlin plays Lopez's new lover, Stan, who meets the love of his life shortly after she has decided to take pregnancy into her own hands.

"Early Show" co-anchor Maggie Rodriguez wanted to know if O'Loughlin was nervous working with such a high-profile celebrity while taking on his first major movie role.

"I was sort of more curious than nervous," he said. "You know she's so famous, and we all know who she is. But, it was great. It was just like meeting anybody."

So who were the jitters for - Jennifer or her husband, Marc Anthony?

"It was funny," he continued. "I came in, and I was talking to Jennifer. Marc was doing something with the kids, and he sort of popped in after I'd been there for a little while. And I was like, 'Hey!' What was supposed to be a meeting with Jennifer and I -- I ended up sort of hanging with Marc. We were hanging out and he was walking around the house showing me stuff - you know, talking guy stuff."

"So he was more than okay with signing off on you working with his wife?" asked Rodriguez.

In addition to the pre-premiere jitters, "The Back-Up Plan" may force O'Loughlin to face one of his biggest fears: inadvertently acquiring fame.

"Now that you're in this movie, I have to tell you that one of your biggest fears could be realized," said Rodriguez. "You said once, 'Losing my anonymity in this world, I think is something that I find terrifying.'"

"Are you okay with not being anonymous anymore?" asked Rodriguez.

"Not really," said O'Loughlin. "I might have to move to Hawaii or something."

On the set of "The Back-Up Plan," Rodriguez noted, O'Loughlin spent a lot of time looking at someone like her - pregnant. Jennifer Lopez's character has been artificially inseminated the day that she meets his character, and the two wind up becoming a couple.

"It's a story about two people whose lives kind of collide; they fall in love, and they don't realize what's happened," said O'Loughlin. "It's that thing about -- you can't control when you fall in love. We think -- we all have these careers, and we have these lives and stuff -- and we think we want to get everything in place and make sure we're ready for love, and we're ready for all that stuff. But sometimes you just can't control it. So then when my character, Stan -- he comes to the realization that, 'Wow, I love this girl. I'm ready for it,' -- she drops the baby bomb on him."

Rodriguez also asked O'Loughlin about his work on CBS' pilot for "Hawaii Five-O." He plays Steve McGarrett in the remake of the classic television show, which aired from 1968 to 1980.

"It's all pretty hush-hush," he told her. "There's no official pick-up in a nutshell. We finished -- I think it's the biggest pilot CBS has ever done. I'm pretty excited about it."