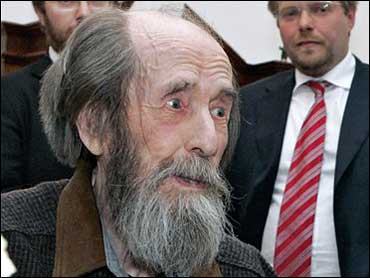 When 1999 turned into 2000, a lot of people asked, "Who was the Man of the Century?" And many answered, "Solzhenitsyn." That was a very solid choice.

Born in 1918, Aleksandr Isayevich Solzhenitsyn became the voice and conscience of the Russian people. There was no greater or more effective foe of Communism, or of totalitarianism in general. His "Gulag Archipelago" was a crushing blow to the Soviet Union - after its publication in the mid-1970s, the USSR had no standing, morally. The book was effective because it was true.

Because he was such a great and important man, it is sometimes overlooked how great, versatile, and prolific a writer he was. He wrote novels, novellas, short stories, poems, memoirs, essays, speeches, and more. "The Gulag Archipelago," he called "an experiment in literary investigation."

"The First Circle," a novel, is many people's favorite book. So is another novel, "Cancer Ward."

He wrote no more gripping or beautiful work than "The Oak and the Calf," his literary memoir. The title refers to an old folk image of a calf butting its head up against an oak: This symbolizes futility. And that was a writer - a lone, persecuted, hounded writer - trying to bring down the Soviet state. Yet the oak fell.

With this memoir and "The Gulag" in mind, Norman Podhoretz once wrote, "[Solzhenitsyn] is returning [to the Russian people] their stolen or 'amputated' national memory, reopening the forcibly blocked channels of communication between the generations, between the past and the present . . ." Few writers have written under such pressure. He would receive mail saying, "Look after your health, Aleksandr Isayevich - we are all depending on you."

In his later years - after age 50 or so - he had the support of a wonderful family, consisting of three boys and his wife, Natalia. Their exile home in Cavendish, Vt., was kind of Solzhenitsyn, Inc.: They all helped with the many tasks of writing and publishing. Out on the grounds of their home is a large rock - a boulder. Solzhenitsyn used to tell the boys, when they were little, that this was a magic horse, which would fly them back, when Russia was free.

Solzhenitsyn returned to his homeland in 1994.

Like everyone else, he had his critics: He was accused of being a megalomaniac, a Slavophile, a right-wing nationalist, an anti-Semite. He was too humane for any of that.

And he did not spend much time on his critics, for better or worse - some of his admirers wished he had. But, as his son Ignat once put it, he could have written "The Red Wheel" (his multi-novel magnum opus, treating the Bolshevik Revolution) or he could have kept up with his critics. He could not do both. He was not interested in popularity or fame. He simply wanted to tell the truth, wherever it took him.

Truth was the essential ingredient of his controversial 1978 commencement address at Harvard: "A World Split Apart." He told the graduates, "[T]ruth eludes us if we do not concentrate with total attention on its pursuit. And even while it eludes us, the illusion still lingers of knowing it and leads to many misunderstandings. Also, truth is seldom pleasant; it is almost invariably bitter." Solzhenitsyn went on to discuss the multiple ailments of the West.

This speech rocked the country, with many prominent liberals - e.g., Arthur Schlesinger Jr. - denouncing him for it. Sidney Hook wrote, "Rarely in modern times . . . has one man's voice provoked the Western world to an experience of profound soul-searching."

Years later, another of Solzhenitsyn's sons, Stephan, caught some flak in the press for a position he took on an environmental issue. One of his opponents said, "Didn't he learn anything from his father?" Stephan answered, "Yes - mainly that the truth isn't always popular."

The hope Solzhenitsyn gave to millions is immeasurable - but we can measure some of it. There is a woman, Youquin Wang, who chronicles China's Cultural Revolution. She does this from the safety of the United States. But, as a girl, she was less safe. Back in the PRC, she found two authors who changed her life: Anne Frank and Solzhenitsyn. After she read "The Gulag," she knew what she would do with her life: commit the lives of the lost to historical memory.

National Review is grateful to have had a relationship with Solzhenitsyn. Mainly, we admired and cheered him. But occasionally we published him - he once sent us a piece over the transom, which is to say, unsolicited. No magazine could dream of more.

Malcolm Muggeridge called him "the noblest human being alive." After passing away yesterday, he is now one of the noblest human beings on earth or in heaven. He is one of the greatest witnesses in all history. And, like all great witnesses, he was inspired by love, the crowning quality of his work and life.
By The Editors
Reprinted with permission from National Review Online