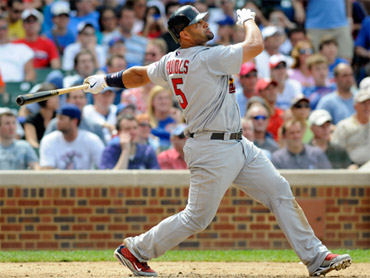 JUPITER, Fla. - The St. Louis Cardinals made Albert Pujols what they said was their best offer.

So get ready, baseball: Pujols seems headed for the open market next fall.

The deadline Pujols set for the Cardinals to reach a new contract agreement passed Wednesday with no deal, making it likely the three-time MVP will become a free agent after the World Series. The Cardinals said they will respect Pujols' wishes and not request more talks during the season, unless their first baseman surprisingly changes his mind.

"A difference of opinion in determining Albert's value simply could not be resolved," said Pujols' agent, Dan Lozano.

The Cardinals would not reveal their offer, though it was believed to be somewhere around $200 million for eight years, possibly with an opportunity for Pujols to obtain an ownership stake in the franchise once his playing days are complete.

Photos: Albert Pujols Through the Years

When — and if — talks resume, it's unclear if St. Louis will increase its offer to Pujols' liking.

Pujols will make $16 million this season in his contract's final year, with $4 million of the money deferred with no interest. A nine-time All-Star, Pujols is the only player in major league history to hit 30 or more home runs each of his first 10 seasons — all with the Cardinals, the franchise he's previously said he wants to remain with for the rest of his career.

"I don't think there's a better guy for us to have on the team," Cardinals teammate Skip Schumaker said. "He's the face of the franchise. You respect both sides of it. You respect what the Cardinals are doing, you respect the management and what Albert's agent is doing. It's a tough situation, as everybody knows. He's an iconic player."

Pujols is expected to be in Cardinals' camp on Thursday, two days ahead of when position players were asked to report. Lozano said Pujols does not want to discuss his contract status either now or during the season.

Nor, for that matter, does St. Louis manager Tony La Russa.

Already, there's buzz around baseball on where Pujols could go. A big-spending club like the Red Sox, Yankees or Angels? Perhaps the rival Cubs? The Texas Rangers?

Before the first pitch of the season, the first debate of the 2011 offseason is underway.

"Goes on the open market, who knows what he'll get?" said Cubs right-hander Braden Looper, a former Pujols teammate.

The only absolute in the process, it seems, is what the Cardinals will give.

In short, they aren't prepared to set records. The team's payroll this season will be between $100 million and $110 million, DeWitt said, noting that the Cardinals lack the revenue streams to keep up with baseball's biggest checkbooks.

"We're not the Yankees or the Red Sox or the clubs that have revenues multi-tens of millions of dollars greater than ours," he said. "How they react remains to be seen. They're great fans. They're the best in baseball. To draw the way we draw in a market the size of ours is extraordinary. No one else can do it. Cardinal fans, they step up year in and year out."

There is no framework for a deal in which St. Louis would get the right of first refusal on any future Pujols offer. Still, the Cardinals believe a deal can eventually get done — and aren't fearing that it will turn into a situation where Pujols simply winds up playing for the highest bidder.

"We know what we can do and what we can't do," general manager John Mozeliak said. "When you operate in that way, you tend not to make bigger mistakes."

The closest Pujols came to an appearance at camp Wednesday morning was a sighting of his black pickup with Missouri license plates in the parking lot of the team's spring training complex.

Pujols was not with the vehicle.

"It really doesn't matter to us," said Cardinals pitcher and union rep Kyle McClellan, when asked about the ongoing Pujols contract watch. "It's none of our business. It's none of anybody's business. ... The truth is, I've never been on the mound and thinking of Albert Pujols' contract."

La Russa said Tuesday that he believes Pujols was feeling pressure from the union to "set the bar" with his next deal. The baseball record is Alex Rodriguez's $275 million, 10-year pact with the New York Yankees.

On Wednesday, La Russa insisted that he'd said too much already

then, moments later, reiterated his words from a day earlier.

"I said if I was running the union or part of the union, I'm not sure I'd handle it any different," La Russa said, about two hours before the noon deadline passed.

"I'm not really concerned about having any issues with Albert in the short-term, or in the long-term for that matter," Mozeliak said. "In terms of the fan base, I hope they understand and recognize that we put a very strong effort out there to try and get something done."