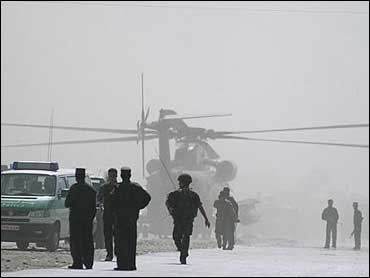 A car packed with explosives pulled up to a bus carrying German peacekeepers in Kabul and detonated Saturday, killing four and wounding more than two dozen in the first fatal attack on the international force.

German Chancellor Gerhard Schroeder blamed the assault on terrorists, calling it a "cowardly and underhanded attack." President Bush spoke with Schroeder by telephone to express his condolences and vow to fight terrorism together, German officials said.

The bus was taking 33 German peacekeepers to Kabul's international airport to return home - some on leave, some after completing their mission in Afghanistan - when the attack took place, said a spokeswoman for International Security Assistance Force, or ISAF.

A taxi approached the convoy the bus was in and tried to slide in between several of the vehicles, German Chief of Staff Wolfgang Schneiderhan said. When this did not work, the driver pulled up alongside the bus and triggered the explosion.

Gen. Afzal Amon, deputy commander of the Kabul garrison of the Afghan military, said a taxi that may have been used in the suicide attack was found damaged in the blast.

CBS News correspondent Tom Fenton says many of the injuries were life-threatening, so the death toll could go much higher. And he says the blast is evidence of the still unsettled situation in Afghanistan.

Officials did not say how many suicide attackers may have been in the taxi.

Suspicion immediately fell on remnants of al QaEda and the defeated Taliban regime, as well as fighters loyal to renegade warlord Gulbuddin Hekmatyar. The three groups have allegedly joined forces in a bid to destabilize the government of President Hamid Karzai, which is largely dependent on foreign troops for its survival. There was no claim of responsibility.

Afghanistan has seen an upswing in attacks - thought to be by Taliban fighters - against American troops, particularly in the south and east. But Saturday's blast was the first deadly assault on peacekeepers since they arrived in Afghanistan to bring security to the capital after the fall of the hardline Taliban regime in late 2001.

"This cowardly and underhanded attack was carried out by terrorists who are against the efforts to bring peace and stability to Afghanistan," Schroeder said in Berlin.

It was not immediately clear if the attacker was targeting the Germans specifically, or the ISAF in general, said Schneiderhan, the chief of staff.

Karzai, who returned Saturday from a trip to Britain, said he "strongly condemned the terrorist attack."

Mr. Bush, in his call with Schroeder, said "the war against terror is not over and that Germany and America both have a special role to play in Afghanistan to return democracy and stability to this country," said Struck, the defense minister.

The two leaders have been at odds since last year when Schroeder ran a re-election campaign that emphasized his opposition to U.S. policy on Iraq and the eventual war. Mr. Bush nevertheless had a friendly chat with Schroeder last Sunday, their first talk in six months, before sessions began at a summit in Evian, France, of top economic powers.

After the blast, witnesses described a chaotic scene, with bits of metal strewn around.

"The explosion made a very loud noise. It shook all of our shops," said Fawad Ahmad, who works at a tire repair store in the neighborhood were the attack happened, not far from the base housing German and Dutch troops.

Correspondent Fenton says the force of the explosion blew the bus several yards off the road.

Dozens of German peacekeepers formed a cordon in the streets around the blast site, barring vehicles, as a large German military helicopter landed in the road nearby

Authorities halted traffic and pedestrians were kept about 200 yards away. Ambulances and other emergency ISAF vehicles roared past.

Since the United States broadened its anti-terrorism campaign to include Iraq, there has been a surge in violence against Westerners in the Islamic world. A May 12 attack on housing complexes in Saudi Arabia killed at least 23 people, bombings in Morocco killed 31 victims, and there have been continued guerrilla assaults on U.S. troops in Iraq.

On May 15, two Norwegian peacekeeping troops were shot and wounded by a renegade Afghan soldier as they were traveling on a road north of Kabul. Two days earlier, a British soldier was slightly wounded when an Afghan man threw a grenade at a peacekeeping base.

In March, ISAF's headquarters in downtown Kabul was hit by a rocket, but no damage or casualties occurred. Also in March, an explosive device set off by remote control in Kabul wounded one Dutch peacekeeper and killed an Afghan translator.

Some 5,000 peacekeepers are in Kabul. Germany and the Netherlands currently command the force but are to hand over control to NATO Aug. 11. At about that time, German and Dutch forces are to return home and be replaced by about 1,800 Canadian troops.

In Brussels, NATO spokesman Robert Pszczel offered the alliance's "full sympathy to the families of the soldiers killed."

"It goes to show what a dangerous environment it is there," Pszczel said. "This reinforces our determination to do the job the nations have asked us to do."