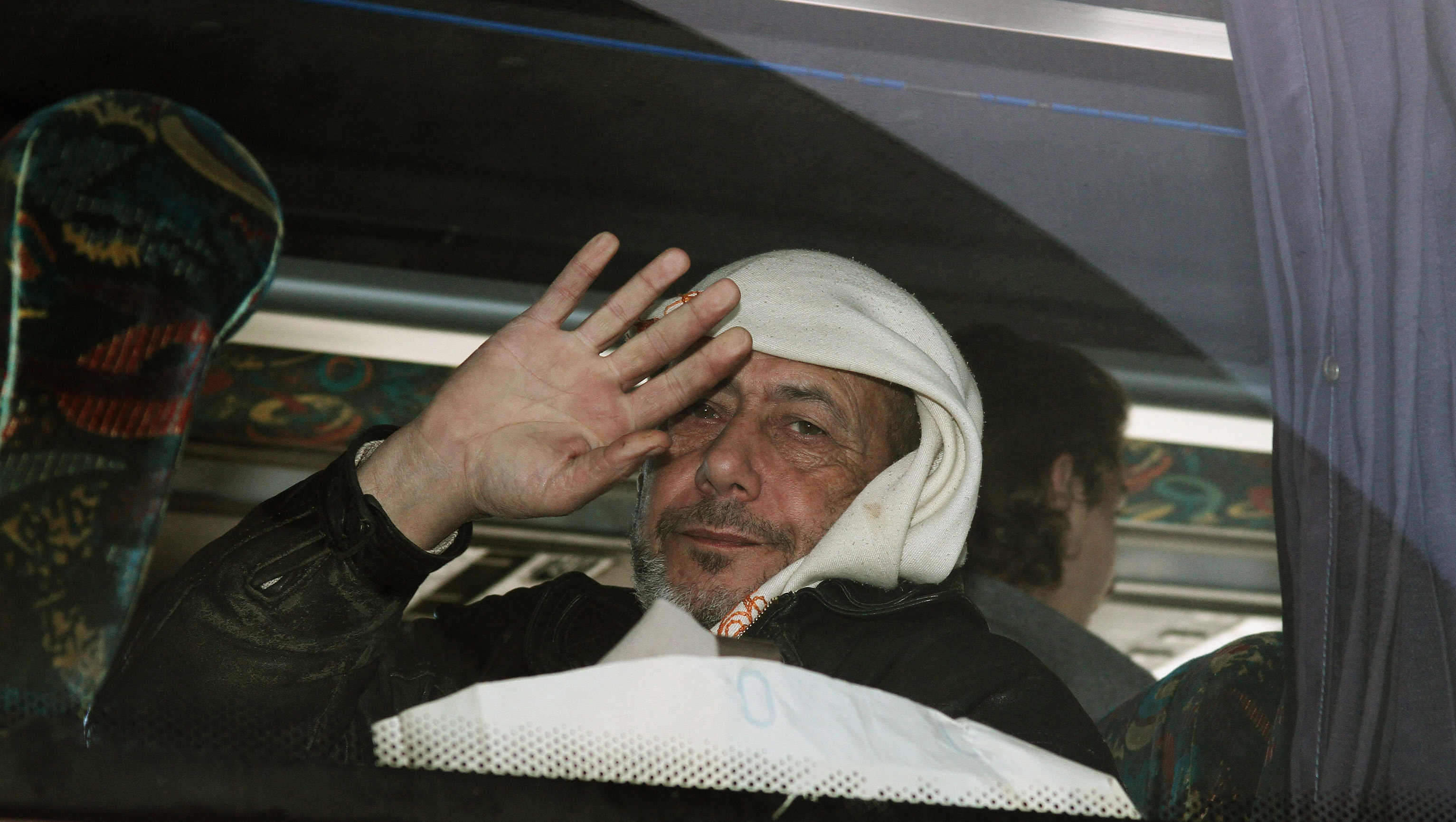 BEIRUT - Hundreds of civilians were evacuated Sunday from the besieged Syrian city of Homs, braving gunmen spraying bullets and lobbing mortar shells to flee as part of a rare three-day truce to relieve a choking blockade. Dozens were wounded as they fled.

The cease-fire came as Syrian officials arrived in Switzerland for a new round of talks with opposition activists-in-exile to try to negotiate an end to Syria's three-year conflict.

More than 600 people were evacuated from Homs on Sunday, said Governor Talal Barrazi. The operation was part of a U.N.-mediated truce that began Friday between the government of President Bashar Assad and armed rebels to allow thousands of women, children and elderly men to leave opposition-held parts of the city, and to permit the entry of food and supplies.

Forces loyal to Assad have blockaded rebel-held parts of Homs for over a year as part of Syria's brutal civil war, causing widespread hunger and suffering.

Dozens of people were wounded when they came under fire as they waited at an agreed-upon evacuation point in the rebel-held neighborhood of al-Qarabis, according to three activists based in Homs, who spoke to The Associated Press by Skype.

Despite the gunfire and exploding mortar shells, hundreds of women, children and elderly men ran toward a group of Red Crescent workers waiting less than a mile away, said an activist who gave his name as Samer al-Homsy. The Syrian activists said the gunfire came from a government-held neighborhood.

The Syrian news agency SANA also reported that civilians came under fire, but blamed "terrorists," the government term for rebels.

At least four busloads of civilians were shipped out, according to footage broadcast on the Lebanese television station al-Mayadeen. Wide-eyed children, their prominent cheekbones suggestive of malnutrition, tumbled out of a bus, assisted by aid workers.

"Our life was a disaster, we had no food, no water," one distressed woman said.

"There was nothing, my children are all sick. They were thirsty," she said, standing with a group of exhausted-looking children as khaki-clad Syrian soldiers, Red Crescent workers in red jump suits and U.N. workers in blue protective vests gathered around the buses.

Some evacuees were to be hosted in government-run shelters, others were going to join relatives in safer areas, while still others said they did not know where they were going.

Khaled Erksoussi of the Syrian Red Crescent, which is assisting the operation, told the AP that the agency hoped to evacuate as many civilians as possible before the truce expires Monday.

The Britain-based Syrian Observatory for Human Rights says the makeshift bombs were dropped on two rebel-held districts of Aleppo on Sunday afternoon. A child and a woman are among those who died, the Observatory said.

Sunday's attacks are part of a weeks-long campaign by President Bashar Assad's forces to wrest control of Aleppo, parts of which were seized by rebels in mid-2012.

Barrel bombs are containers that have been packed with hundreds of kilograms (pounds) of explosives. They are loaded onto Syrian military helicopters and pushed out of the rear door.

The Syrian uprising began with largely peaceful protests but gradually evolved into a civil war with sectarian overtones pitting predominant Sunni Muslim rebels against Assad's government that is dominated by Alawites, an offshoot group of Shiite Islam.  More than 130,000 people have been killed, according to activists. Millions have been forced out of their homes, seeking shelter in neighboring countries or in safer parts of their homeland.

Despite the violence, the U.N. High Commissioner for Refugees, António Guterres, said in a statement that the truce showed "that even in the darkest of nights it is possible to offer a glimmer of hope to people in desperate need of assistance."

The Homs cease-fire was arranged by U.N. mediator Lakhdar Brahimi, who urged the warring sides to aid the estimated 2,500 civilians trapped in the ancient, rebel-held quarters known as Old Homs, to build trust during the first face-to-face meetings of government officials and opposition figures in Switzerland last month.

But the truce only took hold after talks ended, and its last day, Monday, now coincides with the beginning of another round of U.N.-mediated negotiations in Switzerland. The Syrian delegation arrived in Switzerland Sunday evening.

Homs was one of the first areas to rise up against Assad in 2011 and has been particularly hard hit by the war.  Over the past year, the government regained control over most of the city, except for neighborhoods in the historic center.

Meanwhile, in the northern city of Aleppo, Syrian government aircraft dropped makeshift barrel bombs on a series of rebel-held districts, including one that killed more than 15 people in the neighborhood of Haydariyeh, said the activist group, the Aleppo Media Center. The bombs, crude weapons packed with explosives, fuel and metal, set nine vehicles ablaze, including some carrying civilians fleeing the area.

The bombings are part of a weekslong campaign by Assad's forces to wrest control of Aleppo, parts of which were seized by rebels in mid-2012.

The Syrian uprising began with largely peaceful protests but gradually evolved into an increasingly sectarian civil war pitting predominantly Sunni Muslim rebels against Assad's government, which is dominated by Alawites, an offshoot of Shiite Islam.

Syria's many minorities have thrown their support behind Assad, fearing for their fates should hard-line rebels come to power.

On Sunday, extremist rebels killed at least two dozen Alawite gunmen defending their central village of Maan, the Syrian Observatory said. The Syrian state news agency said a "massacre" had occurred, but provided no further details. A video uploaded by rebel sympathizers showed at least one man killed, and bearded, grinning gunmen looting village homes. The Observatory said women and children had been evacuated before the gunmen entered.

Meanwhile, the Qatar-based broadcaster al-Jazeera aired what it said was new footage of a dozen Syrian nuns who have been held captive by rebels since December.

Rebels seized the nuns and at least three other women from the Greek Orthodox Mar Takla convent when fighters overran Maaloula, a mainly Christian village north of Damascus. The group, who work in the convent's orphanage, was taken to the nearby rebel-held town of Yabroud.

An activist from the area who uses the name Amer, said rebels belonging to the al Qaeda-linked Nusra Front were holding the nuns. He said Qatar officials were trying to negotiate their release and that the video was likely issued to prove to mediators that the women were in good health.