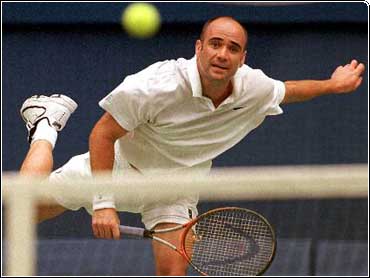 Australian Open champion Andre Agassi withdrew Tuesday from the Sybase Open because of a lower back strain.

"Everybody here knows it's a great disappointment for the tournament," said Jim Courier, who won his first-round match Tuesday. "He's the biggest draw in the game, and he's playing the best tennis of his career."

Agassi reported cramps while flying to San Francisco from Zimbabwe, where he helped the United States to a 3-2 first-round victory in the Davis Cup.

He arrived in San Francisco on Monday and attempted to work out at the San Francisco Tennis Club on Tuesday afternoon. After his workout, he had severe back pain.

It was at the Sybase Open in 1998 where Agassi defeated then-No. 1 Pete Sampras in the final to begin his comeback to the No. 1 ranking. Agassi has won the tournament four times, all in the 1990s.

Agassi will be replaced in the main draw by Scott Humphries, the highest ranking player to lose in the qualifying round.

Sampras was seeded No. 1 last year when he withdrew from the tournament in the semifinals because of a left ankle injury.