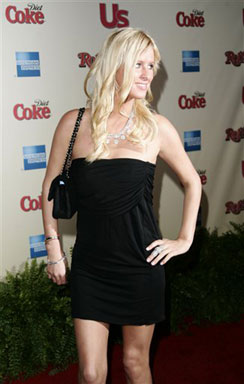 Andre Agassi made a quick exit Thursday from the most lucrative tournament in the world and talked little about his relationship with Steffi Graf , who was not there to see him lose.

Haas upset the U.S. Open champion to move into the semifinals of the $6.7 million Grand Slam Cup, which gives out more money per player than any other tournament.

Agassi, who had a bye into the quarterfinals, had not played since winning the year's final Grand Slam tournament nearly three weeks ago. The rustiness showed.

"It's always tough, your first match after a few weeks away, especially after a long summer," Agassi said. "He served big on some crucial points. I was missing a lot of shots."

For the first time in three days, the Munich Olympic hall was nearly full to see the showdown between the rising German hope and the man whose romance with Graf, the retired German star, has been dominating recent headlines in Germany.

Had Graf been there, she would have seen a pale edition of Agassi, who sleepwalked through the first set before picking up his game in the second. But he ran out of gas after Haas broke his serve for a 4-3 lead in the third.

"I felt tired, which was a surprise. I felt so sharp the whole summer," Agassi said.

Agassi and Graf arrived in Munich together on Tuesday, but immediately parted ways. Graf reportedly went briefly to Austria and Berlin before returning home to Heidelberg late Wednesday.

Agassi dismissed reports the couple planned to marry and have children, saying he did not want to talk about their relationship.

"I've just enjoyed my time with her. It's not any different than anybody you enjoy spending time with," he said.

Agassi said he would stay in Munich to practice before going to a tournament in Basel, Switzerland, next week. He said Graf would not be joining him in Munich.

"That's her business, what she's doing," he said.

In the women's quarterfinals Thursday, defending champion Venus Williams beat Barbara Schett 6-3, 6-4 to set up a semifinal showdown with No. 1 Martina Hingis, while No. 2 Lindsay Davenport beat Mary Pierce 3-6, 6-2, 6-4.

Davenport's victory puts her into the semifinals against the younger Williams sister, Seena, the U.S. Open champion. The women's semifinalists earned $200,000.

In another men's quarterfinal, Thomas Enqvist beat Nicolas Lapentti 6-3, 6-2. Enqvist, although ranked No. 17, three places under Lapentti, had a bye into the quarterfinals by virtue of his runnerup finish at the Australian Open.

Coming off a back injury, Enqvist blew two set points at 5-2, but then served out the first set. An early service break in the second put him ahead for good. He will next play Haas.

The 29-year-old American lost in the final here last year. In five appearances at the Grand Slam Cup, Agassi has earned a total of $1.775 million.

The tournament invites the 12 men and eight women with the best records at the four Grand Slam events of the year. The men's winner gets $1.3 million, while the women's champion receives $800,000.

Agassi regained the No. 1 ranking after winning the U.S. Open. He had come into the tournament having won 35 of his last 39 matches. Three of those losses were to Pete Sampras, the other to Yevgeny Kafelnikov.

Haas, who is ranked No. 11, became the first player outside the top 10 to beat Agassi since May.

"I had quite a good performance," Haas said after earning $325,000 for reaching the semifinals.

"It was the first time I beat a No. 1 in the world. It was my best match ever," said Haas, who now has a 2-1 career record against Agassi.

Haas fired 17 aces, some of them with his second serve, while Agassi had seven. Agassi also had 10 more unforced errors, 32.

©1999 The Associated Press. All Rights Reserved. This material may not be published, broadcast, rewritten, or