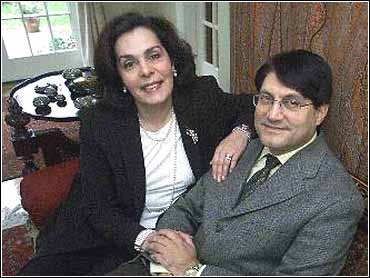 Some wealthy and well-educated Afghans who have lived outside their country for years say they are prepared to abandon their prosperous lives in the West and return to rebuild their country.

While they're unsure what awaits them, they say it's their duty, a calling of sorts to get their battered country back on its feet.

Fatima Gailani, the politically active daughter of a leading Afghan religious elder, says she wants to return permanently and spearhead a commission to drum up aid for illiteracy and women's rights causes.

Her husband, Anwar Ahady, a professor at Providence College, dreams of being prime minister. But the head of the exiled Afghan Social Democratic Party, he said he'd be content winning a seat in a future parliament.

"It would be a great sense of achievement," Shahryar said by telephone from Bonn, Germany, where he attended United Nations' sponsored talks on forming a new government in Afghanistan. "This is a phenomenal opportunity that few people have. Here's a country that's destroyed and ground into the dirt. To go back and rebuild it, my God, what a sense of opportunity."

John Schoeberlein, director of the Forum for Central Asian Studies at Harvard University, said Afghanistan will need all the well-educated help it can get, especially those with connections to the West, in building democratic institutions from scratch.

But he warned that the elites will need to persuade freedom fighters on the ground that their expertise is needed.

"I think it's a struggle," Schoeberlein said. "They have their work cut out for them."

There are about 100,000 Afghans living in the United States, and some 300,000 living elsewhere in the West, mostly in Great Britain, Germany, Canada and Australia.

Opinions differ as to how many will go back. Those who took lesser jobs when they emigrated are seen as good bets to return. Others, such as doctors, lawyers or engineers, may assess what's needed before deciding to what extent to involve themselves.

Ahady and Gailani have known for some time they wanted to return to the country they fled under separate circumstances in 1978.

"Although we are well-established in the West, though we have comfortable lives, we still wanted to go back to Afghanistan, have our future in the country," the 47-year-old Gailani said.

Gailani's father is Pir Syed Ahmad Gailani, a Sufi cleric and a close adviser to Mohammad Zaher Shah, Afghanistan's 87-year-old exiled king whom the West sees as a unifying figure until elections are held.

In Bonn she was a member of an exile delegation allied with the king that negotiated the interim administration.

Ahady, 51, rejected the pact, including the offer of two Cabinet positions, saying it gave too much power to the northern alliance. So, he said he'll help some other way.

Shahryar left his homeland in 1956 on a government scholarship to study physical chemistry in the United States. He graduated from the University of California-Santa Clara and is forging a career supplying solar panels for U.S. space shuttles and satellites.

He said he intends to move back once he and his wife, Hafizah, are sure their children can obtain a comparable education as in the United States.

"Eventually, I'd love to live and retire in Afghanistan," Shahryar said. "As much as I love America, this is my country, and I want to be there."