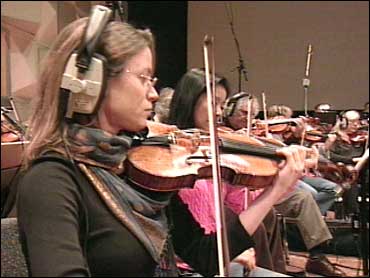 GameCore is a weekly column by CBSNews.com's William Vitka and Chad Chamberlain that focuses on gamers and gaming.


A while back, we brought you a , now we're happy to provide new information about the title as well as video from the production of the game's soundtrack.

Recorded at Paramount Pictures, Hollywood, Calif., the Advent Rising soundtrack is a completely original musical score that incorporates live orchestral and vocal elements to create a variety of musical themes utilized throughout the game. The soundtrack is also planned for retail release to coincide with the game.

Emmy Award-winning conductor Mark Watters was chosen to lead the 70-piece orchestra and the score was mixed and recorded by Armin Steiner. Steiner is a Grammy Award-winning mixing engineer best known for his work on such movies as "Finding Nemo," "Seabiscuit," and "The Matrix" trilogy.

I wish I could say that I really liked "The Matrix" trilogy. Wait, no I don't.

We've also got a nifty new trailer to look at. Just click here.