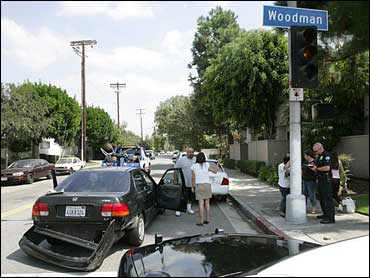 Workers who accidentally triggered a massive lunchtime blackout were upgrading the city power system during peak daytime hours because the city was "cutting corners" and reluctant to pay higher wages at night, a union official claimed Tuesday.

City officials denied the allegation, and one City Council member questioned whether the outage was an intentional move by the union to pressure the city in an ongoing contract dispute.

Almost 2 million people, from downtown Los Angeles to the San Fernando Valley, lost power Monday for as long as 2 1/2 hours. Traffic lights were out, elevators stopped, police were alert but said terrorism was not suspected.

The shutdown came after a Department of Water and Power crew incorrectly cut several control lines at a receiving station in the Toluca Lake area of the San Fernando Valley.

Ron Deaton, the utility's general manager, said it was an honest mistake by technicians.

"That's all there is, there ain't no more," Deaton told officials at Tuesday's City Council meeting.

The workers were installing automated monitoring controls to provide department officials with immediate information about the status of its system.

Brian D'Arcy, an official with the union representing 8,200 utility workers, said technicians should have done the work at night, when power usage is lower and there is less potential for wide-scale shutdowns.

Night work means higher wages, though, and the city didn't want to pay, he said.

"They're cutting corners," said D'Arcy, business manager for the International Brotherhood of Electrical Workers Local 18. "They shouldn't have done it in the middle of the day when people are coming back from lunch and turning their computers on."

Carol Tucker, a Department of Water and Power spokeswoman, denied that accusation. "There's no validity to that statement," she said.

The union comments came amid a contract dispute, and City Councilman Dennis Zine wondered whether the workers caused the shortage intentionally.

"There's no question that water and power is in contract negotiations," Zine said. "Could this be interpreted as ... 'if we don't get this we're going to shut down the power of Los Angeles?"'

The City Council has yet to approve a proposal that would increase utility workers' pay between 16.25 percent and 30 percent over five years. D'Arcy said the union will hold a strike vote in the coming weeks.

Stephanie McCorkle, a spokeswoman for the California Independent System Operator, which manages much of California's electric grid, said city officials took more than three hours to formally alert power operators in 14 Western states and sections of Canada and Mexico.

Outages and voltage swings can cause problems elsewhere, as the 2003 Northeast blackout showed.

"They didn't' break any rules. But we certainly would have expected something a little sooner," McCorkle said.