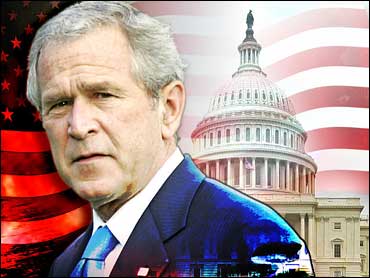 Barely a week after he commuted the 30-month sentence of a former White House insider who was convicted of engaging in felonious attempts to thwart investigations of administration wrongdoing, President Bush has erected another barrier to getting to the truth about whether he and his aides have knowingly violated the law.

Bush's lawyers suggested that Miers and Taylor, both central players in the scandal that has emerged over attempts by the administration to politicize federal investigations and prosecutions, might speak with members of Congress about the firings of U.S. Attorneys who did not go along with the administration's agenda. But the administration says that can only happen in closed-door, off-the-record "interviews" that would not be given under oath.

Conyers and Leahy have repeatedly rejected such proposals. The committee chairs say, correctly, that inquiries into whether the administration used the Justice Department for political purposes — particularly moves to fake up so-called "voter fraud" cases as part of a broader push to make it harder for elderly, low-income and minority citizens to cast ballots — must be open and above board.

That is not the style of this White House.

So uncooperative is Bush that his attorney, White House counsel Fred Fielding, even refused a request from lawmakers that the President explain the basis for invoking executive privilege.

Fielding would only claim that the "assertion of executive privilege here is intended to protect a fundamental interest of the presidency: the necessity that a president receive candid advice from his advisers and that those advisers be able to communicate freely and openly with the president, and each other and with others inside and outside the executive branch."

The truth, of course, is that the "fundamental interest" of the Bush presidency that is at stake is far more consequential than that of defending candid conversation in the White House. As with the decision to commute the sentence of "Scooter" Libby, the former chief of staff for Vice President Cheney, this imposition of executive privilege would appear to have far more to do with protecting the president from scrutiny than with maintaining the quality of internal White House communications.

Earlier this year, former White House counselor Dan Bartlett unwittingly confirmed that President Bush participated in discussions with Attorney General Alberto Gonzales and political czar Karl Rove about firing US Attorneys who weren't sufficiently political in their prosecutions, is hightailing it out of the administration.

That makes the congressional requests for testimony from key players in the US Attorneys scandal something very different than a political "fishing expedition" that might chill dialogue in the White House. This is a matter of national interest that goes to the most critical question about any administration: Is the president playing by the rules of the Republic? Or has he placed himself above the rule of law and the Constitution to which he has sworn a solemn oath?

The determination of this administration to stonewall the U.S. Attorneys inquiry — as it has so many others — sets up a classic confrontation in the courts. Both Leahy and Conyers have said that they are prepared to seek a Contempt of Congress citation, which is the essential first step in asking the federal courts to determine whether Bush has abused his authority to invoke executive privilege to block requests from the legislative branch.

It was on the basis of such a challenge that the Watergate scandal during the presidency of Richard Nixon evolved into a serious discussion of impeachment.

Objecting to the administration's "unacceptable all-or-nothing position," Conyers complains that Bush & Co. "now will not even seek to properly justify their privilege claims."

The senior member of the House committee, a veteran of the House's successful court challenges to Nixon during the Watergate struggles, added, "Contrary what the White House may believe, it is the Congress and the courts that will decide whether an invocation of executive privilege is valid, not the White House unilaterally."
By John Nichols
Reprinted with permission from the The Nation