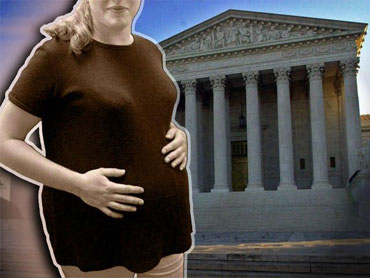 (CBS/AP) Can fetuses feel pain? A new study suggests that they probably can't - at least not until the final months of a woman's pregnancy.

According to a British study by the Royal College of Obstetricians and Gynecologists, a human fetus cannot feel pain before the age of 24 weeks. It echoes an American study which put the age at 28 weeks.

The new study says that nerve connections in the brain are not sufficiently formed to allow pain perception before then. Even after 24 weeks, the doctors in the study say there is increasing evidence that the fetus is in a state of "continuous sleep-like unconsciousness or sedation."

The government-commissioned study is a setback for British anti-abortion activists, who want the country's current 24-week time limit for terminations reduced.

In both Britain and America, science and the law have been uneasy partners.

In April, Nebraska passed a law banning abortions after 20 weeks on the theory that fetuses would feel pain during the process. Some research has suggested that's possible.

The Supreme Court will likely be asked to rule on the law's constitutionality and any eventual case has the potential to turn the logic of abortion on its head.

Roe v. Wade, the Supreme Court ruling which has made most abortions legal since the 1970s, argues that abortions should not be allowed once a fetus is viable outside the womb.

The Nebraska law argues that the dividing line should not be viability but pain. If the new study is to be believed, there is now fresh ammunition for those in favor of overturning Nebraska's ban.