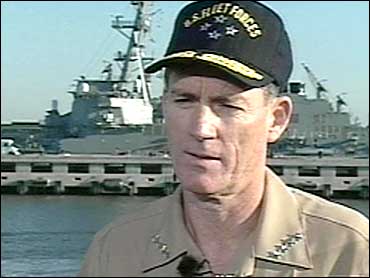 The Early Show co-anchor Rene Syler went to Norfolk, Va., to see the world's largest naval base, get a tour of the cruiser USS Vella Gulf, and talk to Admiral Robert Natter about the contribution of those under his command to the war in Iraq.

The USS Vella Gulf is officially named for a World War II battle in the Solomon Islands, but its nickname is Turbo Dog. Commissioned in 1993, it weighs more than 9,600 tons.

Admiral Robert Natter, from his base, the Naval Station Norfolk, commands the U.S. Atlantic Fleet of the Navy. His territory stretches from Maine to South America.

More than 125 Navy ships are currently in the Iraqi theater. Of them, 30 are from the Norfolk base. "Some have been there for almost nine months, others for only a month or so," he said.

Its mission is to support and improve the personnel and logistics readiness of the U.S. Atlantic Fleet.

"I think the role of the Navy has to do with the ability to put precision-guided munitions on the target, and also the support maneuver warfare, as dictated by General Frank, in theater," he said. "I think the Navy's done that very professionally in concert with the Air Force and the other services in support of our maneuver on the ground."

Their job is to keep constantly in a state of readiness. "I think the American public ought to take great pride in the fact that their Navy is a very ready Navy," he said. "On Sept. 11, we had 20 ships get under way within a couple hours to help defend this country. We'll be able to sustain whatever is necessary to defeat this war on terrorism," he said.

After Sept. 11 the Vella Gulf joined three other Navy ships patrolling the coast of New York to defend the air space during what's been known as "Operation Noble Eagle."

The commander of the vessel, Capt. Rick Rikard, has just finished a rigorous training cycle. "We are ready to go whenever needed," he said. "I have got 400 American patriots, the best young folks you'll find anywhere in the world, and it's an honor to serve and command them."

To find out how well they are treated, Syler went to where the food is, the mess hall that serves 1,000 meals a day. One officer said he had just eaten hash browns, eggs, pancakes, milk and cereal, and agreed it was not quite home cooking, but pretty close.

So how do he and his fellow sailors stay fit after eating all that food? With this ship's narrow and steep stairs, who needs a Stairmaster?