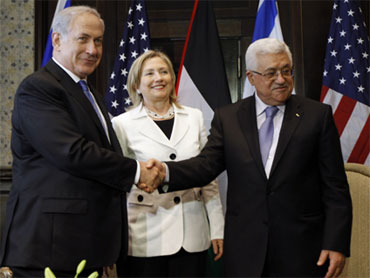 Offering a positive note after two days of inconclusive Mideast peace negotiations, Palestinian President Mahmoud Abbas said Thursday he sees no alternative to continuing the talks in search of a peace deal with Israel.

"We all know there is no alternative to peace through negotiations, so we have no alternative other than to continue these efforts," Abbas said, speaking through an interpreter during a welcoming ceremony for visiting U.S. Secretary of State Hillary Rodham Clinton.

It was not clear whether Abbas was suggesting that the Palestinians would remain committed to the talks even if Israel does not extend a curb on Jewish settlement construction in the West Bank beyond the end of this month. He had previously said the talks could not survive without continued restrictions on the construction in areas the Palestinians want for a future state.

Clinton and Abbas met at the Palestinian Authority's headquarters in the West Bank.

Abbas thanked the Obama administration for its commitment to finding a deal between Israel and the Palestinians, and Clinton reiterated her determination to find compromise solutions.

The United States is "committed and determined to work for a peace agreement through negotiations that leads to an independent, sovereign and viable Palestinian state that realizes the aspirations of the Palestinian people," Clinton said.

Afterward, Clinton was scheduled to be driven to Amman for a working lunch with Jordan's King Abdullah, whose country already has a peace treaty with Israel and is a strong supporter of efforts to work out a deal between Israel and the Palestinians.

The Israeli-Palestinian peace negotiations — which started Tuesday in Egypt and concluded Wednesday in Jerusalem — produced no apparent breakthrough. Both sides said they would continue striving toward their goal of a final settlement within one year.

Dates for the next round of negotiations at the leaders' level are supposed to be determined during consultations next week.

Gaza militants opposed to the peace efforts have heated up the border with Israel in recent days, sending mortars and rockets crashing into southern Israeli communities and drawing retaliatory Israeli airstrikes.

Palestinian official Raed Fattouh, who coordinates the flow of goods into Gaza with Israel, said the Israeli military also canceled plans to let new cars enter Gaza on Thursday for the first time in four years. The Israeli military had no immediate confirmation.

The passage of new cars through Israel was banned after militants affiliated with Gaza's ruling Islamic militant Hamas group captured an Israeli soldier in June 2006. The serviceman, Sgt. Gilad Schalit, remains in captivity.

George Mitchell, the Obama administration's envoy for Middle East peace, was traveling separately to Syria on Thursday for talks with senior government officials about starting a separate Syria-Israel peace negotiation. Later Thursday he was due to travel to Lebanon.