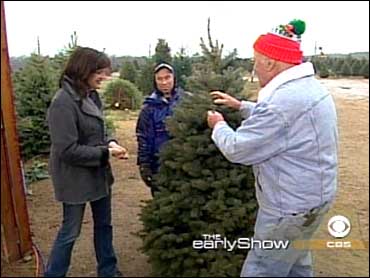 With Christmas just a little over two weeks away, it's time to get that family Christmas tree.

The Early Show correspondent Melinda Murphy went to Big John Leyden's Christmas Tree Farm, one of the largest in southern New England, to get some tips on how to pick out that perfect tree and maintain it through the holidays.

"Get rid of the plastic. The real is fantastic," says the 6-foot 4-inch tall Leyden, who points out that real trees are cheaper when you get them at a farm and their freshness is guaranteed.

If you are picking your tree from a group of cut trees, like at a retail lot or garden center, here are a few tips he shares to get a fresh tree:

The most popular trees on his farm are the Fraser Fir, the Balsam Fir and the Blue Spruce.

The Blue Spruce is a tree that, as Leyden puts it, "has a really great shape." It comes in a range of colors, going from green to a greenish-blue, hence the name. It has very strong branches, great for people who have those old, heavy Christmas ornaments. The only down side is that the tree has very pointy needles; Leyden suggests that you wear gloves when you decorate.

The Balsam Fir at one time was the most popular tree. It was considered the traditional Christmas tree up to about 20 years ago when other varieties started flooding the market. It is the most fragrant tree you can buy. The branches are strong, which means it also has a great holding capacity for ornaments. It is a lighter green in color. It is very similar to the Fraser Fir, though it does not have the silver coloring on the under-part of the needles.

The Fraser Fir is, Leyden says. it is "The King" of the Christmas trees. It has a tremendous aroma and is very airy, so you get great depth when you put decorations on it. It is also a very lightweight tree. Like all fir trees, the needles are flat and very dark on top, but the Fraser needles are silver underneath. Leyden says the needles are outstanding.

Leyden will usually have one of his people cut down a tree for you with a chain saw (takes all of about 3 seconds). But if you want, you can cut it yourself. It is easier if you use two people.

You usually cut a tree with a saw because of the low branches; you never use an ax. The cutter usually lies on the ground with the saw as the helper holds the bottom limbs up. While the cut is being made, the helper should tug on the tree lightly to ensure that the saw kerf remains open so the saw does not bind. The tugging force should be applied to the side of the tree opposite the cut.

When using a chain saw, a back cut should be made first, with the final cut coming from the opposite side.

After you cut the tree, Leyden says that you should have it wrapped with some type of netting to bring it home. This makes it easier to transport; protects the tree when you bring it in the house; and makes it easier when you put it in the stand (you unwrap the tree once it is in the stand at home). This might cost a couple of extra dollars (it is included in Leyden's tree price), but he says it is worth it. Leyden puts on plastic wrapping with a manual baler and twine with a power baler. The baler and twine do not hurt the tree. In fact, Leyden says that it is so safe, that a person could go through it.

Once the tree gets home, Leyden says you should make a second cut in the trunk, sawing off about two inches. This gets the juices flowing again. Then you should put the tree in a large bucket of lukewarm water for a few hours before putting it into a stand.

The tree stand is very important. Leyden says to make sure to get a stand that fits your tree. You don't want to cut the bark around the base of your tree to make it fit into the stand. This destroys the cambium layer - the protective layer that allows the tree to absorb water.

Also, make sure your tree stand holds at least two gallons of water; the tree needs lots of water - a new tree put in a stand can drink up as much as 1 1/12 gallons of water in the first 24 hours that it is home.

Once the tree is up, make sure you continue to check and fill the stand with water. "If the stand ever goes dry, it's all over. Your tree is a goner." If you keep the tree watered, it can last four to six weeks. Leyden also recommends putting a preservative, like Prolong, in the water. The preservative kills the bacteria and keeps the tree fresher longer.

The National Christmas Tree Association says to be careful about adding things to the tree's water. They say plain water is usually the best (water temperature doesn't matter). They are concerned that people will put things in the water like sugar, salt, vinegar, even vodka to keep the tree longer or better looking. These home recipes always show up this time of the year and all they do is harm and kill the tree quicker.

The "tree bag" is a white plastic bag that you put at the base of the tree when you put it up and it acts as a tree skirt. After the holidays, when you are ready to take down the tree, you pull the skirt/bag up and over the tree and tie it at the top: it acts as a bag for the tree. This prevents the needles from falling all over the place and makes it very easy to carry and take out of the house.

Leyden says you should recycle your tree after the holidays. "Don't ever think about throwing it away. Most communities have their own chipping machines where you can take your tree and turn it into mulch. Then you can take your mulch back home and use it gardening. I have my own chipper right here on my farm for my customers."

"Another way to cut up your trees is to take the trim off" (or leave some on like tinsel) "and put it in your yard. Dress it up with popcorn or nuts and it makes a great bird feeder. Eventually it will die. And when it does, you can cut off the branches and use it for mulch. Now all you have is the trunk. Most towns have recycling programs that will take it."

"You don't want to cut up your tree for firewood because it's too sappy. But you can cut off the limbs and use them as a wind block, draping them over your bushes that can't withstand the cold."

Other uses for the trees after the holidays are: