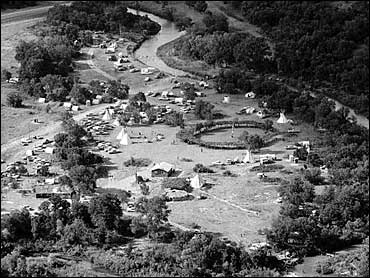 Phil Stevens is his "English" name, but he traces his ancestry, and his Indian name back to the Lakota Sioux tribe.

"In Lakota, it's 'wa-ha-cha-ka-yoo-ha-ma-nee,' which means literally 'man who walks with his shield' and that has been abbreviated to 'Walking Shield'."

Stevens grew up in East Los Angeles, went to UCLA on an athletic scholarship and became an aeronautical engineer. He created, and headed, a multimillion-dollar corporation and sold it all just so he could help his people.

"I have gone from intercontinental ballistic missiles back to bows and arrows in a retrogress that I'm very, very pleased with both careers," he says.

The devastating poverty Stevens saw the first time he visited a Sioux reservation in the '80s was shocking. Worse, in 2004, not much has changed on South Dakota's Rosebud Reservation.

"In the last 10 years, we've been able to provide 963 houses for over 5,000 homeless and needy American Indians," says Stevens

Walking Shield has provided 85 houses on the Rosebud Reservation.

"This has all the conveniences, like the bathroom and the kitchen and the refrigerators, everything is all set up in here like the cabinets," says Frances Picktpin Gordon.

But despite the assistance provided by Operation Walking Shield, the tribe's needs are great.

"Our waiting list for housing is like 1,500," says Ned Metcalf, a member of the Rosebud Sioux Tribe. "And the unemployment is probably 82 percent or more."

"Over the past, he helped me with clothing, food. They came in, they fixed some of the roads here," says Bone Shirt.

Stevens used his management expertise and experience working with the U.S. military.

"It's, to a certain extent, a clash between two cultures: the military culture that works on split-second timing and the Indian culture that has worked typically by the phases of the moon. And when we bring these two things together, and we have done that successfully, now we get programs done."

Because of Walking Shield, National Guard medical staff have come to the reservation for readiness training.

"They were happy to finally do a humanitarian mission in the United States for our own people. Most of the time, they go out of the country," says Lt. Cathy Baumiller, projects manager with the Army National Guard. "And they were very happy to do it here in South Dakota for our own people."

The assistance is a source of life blood for a hospital struggling to meet the tribe's skyrocketing medical needs.

Dr. Tim Ryschon, clinical director at the Rosebud Health Care Facility, says, "Of the total number of encounters that we delivered last year, I would estimate that the military staff provided about 20 percent of those which would be about 20,000 patient encounters."

Phil Stevens says "I'm honored that I'm able to bring my talents, what little amount I can contribute, to an overwhelming problem."

Phil Stevens is driven to provide Native Americans the same chance he had to achieve the American dream. Until he can do that, he is determined to be the "walking shield" among his people, to protect, honor, and serve them.

"It's sometimes like there's a giant wave 150 feet coming at you, and it's very easy for a person to turn and run. But we don't," says Stevens.