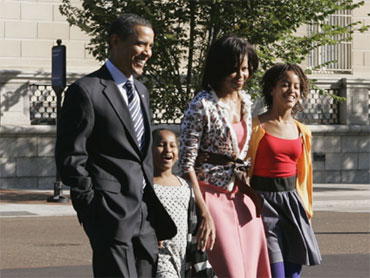 From the beginning, President and Mrs. Obama laid down the law. Their daughters, Sasha and Malia, were off limits to the press.

While the media have respected that, their parents have broken the rules a few times, CBS News Congressional Correspondent Nancy Cordes reports.

Malia, 12 and Sasha, 9, captured the public eye even before their father took office, but their lives are kept private -- though, here and there, the Obamas have let some details slip. Precocious Sasha loves basketball, likes to dance hip-hop and plays piano. Malia, now 5'9", has braces, plays the flute and wants to save the tigers.

Growing Up in the Public Eye

"We're big tiger savers," Michelle Obama told a crowd. "Malia's one issue for her father is saving the tigers."

The Obamas have said they're trying to give the girls a normal life under abnormal circumstances. They wake up at 6:00 a.m., have savings accounts and allowances, though the amounts are secret, and they pitch in with daily chores.

"I can't immediately find another president who maintained that kind of structure for their children," says presidential historian Doug Wead.

Wead, who wrote "All the President's Children," says the Obamas are trying to follow the example set by the Clintons and the Bushes, keeping their children out of the spotlight. "The further the kid is away from the White House or the less they're seen and heard, the better they do in life," Wead added.

But, like any proud father, the President can't always help himself from bragging about the girls.

"They don't have an attitude. They're respectful to everybody. They're curious. They're funny. They're just really neat kids," Mr. Obama said.

A typical dad -- from a not-so-typical family.

Anita McBride, who served as an assistant to former President George W. Bush and chief of staff to his wife, Laura Bush, joined Early Show co-anchor Erica Hill from Washington to discuss the fascination with the first family: