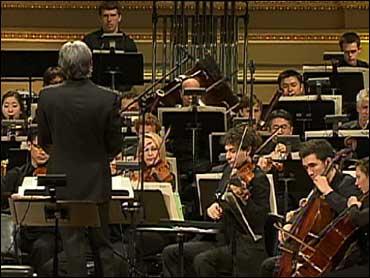 On Wednesday night at New York City's world-renowned Carnegie Hall, the music of the ages was played with a modern twist.

CBS News correspondent Michelle Miller reports that in a first-of-its-kind concert, famed American conductor Michael Tilson Thomas offered a new answer to the old humorous question: "How do you get to Carnegie Hall?"

Among those selected were Owain Williams, a tympanist studying at London's Royal College of Music. He says, "To audition online, I mean that's completely new."

And violinist David France, a music teacher in Bermuda. "I needed a voice," France said on tape. "The violin was my voice."

The Musicians came to Carnegie Hall from more than 20 countries. The orchestra only had three days to rehearse.

During practice, violinist Hanah Stuart says, "I don't think we have it yet, but I think we're going to get there."

The musicians couldn't help but be nervous on the world's most legendary stage.

"It took me like the first of the whole half of the concert until I kind of settled down," says cellist Rachel Hsieh.

By the time the performance was over, it was downloaded on the World Wide Web.

Tympanist Williams says he'd "never done a concert with that many TV cameras, that much press."

As for worries this grand experiment would compromise the music, as Stuart said afterward, the musicians "nailed it."

Last night's live performance lives on, just a click away in the virtual world.

Watch the full concert below, and click here for the Symphony's site: