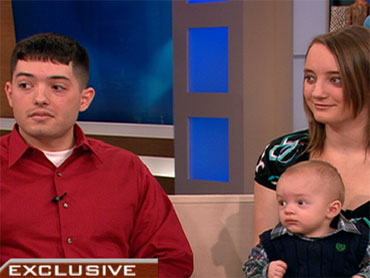 An Iraq war veteran training to be an emergency operator in Thurston County saved his own son's life when his wife called 911 in a panic as the boy choked on a small piece of plastic.

Janna Scott says she was "freaking out" on Feb. 4 when she called 911 from her Lacey home last week to ask for help because her baby, Jacob, was choking and not breathing. A familiar voice answered the phone. Coolly and calmly, Chris Scott talked his wife through the proper procedure.

Chris, 23, left Iraq in September after a one-year deployment as a tank crew member with the Marine Reserves. He told The Olympian newspaper it's in his nature to remain calm under stress.

But the Yelm High School graduate who grew up in the Olympia area said he was scared inside as he realized the person in danger was their son.

"My heart was pounding," he said. "My hands were a little bit shaky."

Chris said he referred to instructions on what to do in cases involving a choking baby and relayed them to Janna. He also sent emergency responders to their address.

After Janna patted Jacob on the back, he coughed up a small piece of plastic that he must have ingested after it fell to the ground from a windowsill, she said. He was OK, and the emergency responders who arrived on the scene minutes later did not have to take him to the hospital, she said.

Immediately after Chris took the call, Clark walked up to congratulate him, but she had no idea he had been speaking to his own wife.

"I said, 'Chris, you just did an amazing job; you just saved that kid's life,'" Clark said. "And he looked at me a little rattled and said, 'That was my baby.'"

His employers gave him the rest of the day off.

Dispatchers usually avoid taking calls from family members, but sometimes there's not enough time to hand a call off to someone else, Clark said.

"Nobody could have done a better job than him," she said. "This is a wonderful story. 'Semper Fi' to all the Marines out there!"

Chris definitely is ready to complete his training and start dispatching, she said.

On Friday, the family brought their healthy son to the 911 center for a visit.

And on Monday, Chris and Janna brought little Jacob to the set of "The Early Show" in New York, and told their story.

It was "a big scare," Janna understated. And his military and 911 training helped him, Chris told co-anchor Maggie Rodriguez, adding that he's normally a calm, laid-back person anyhow.

To hear Janna's emotional 911 call and see the interview, click on the video below: