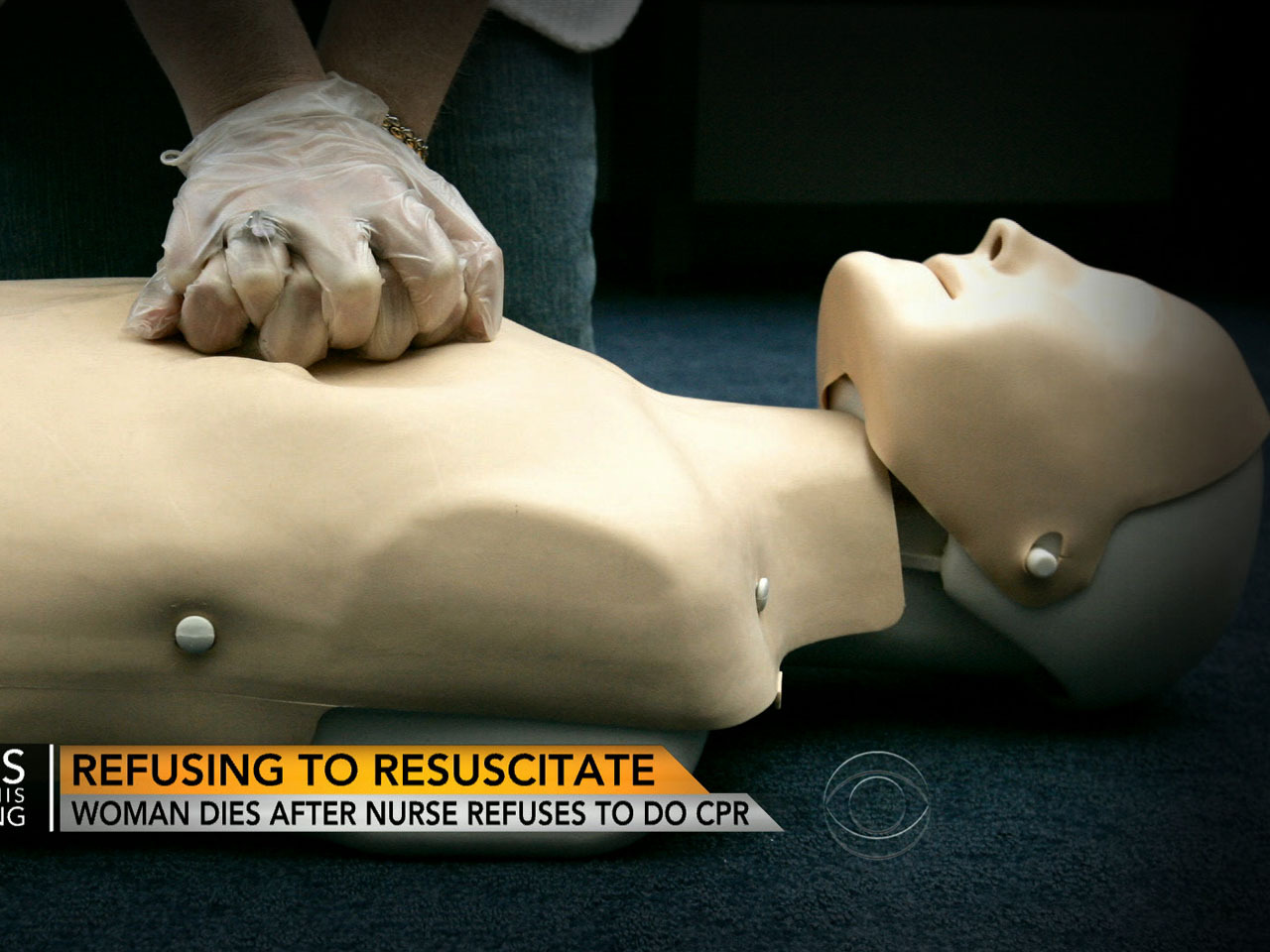 (CBS News) Officials have released a dramatic 911 call between an emergency dispatcher and a nurse at a retirement home. In the recording, a nurse can be heard refusing to give CPR to a dying woman.

Inside a Bakersfield, Calif., retirement home, an 87-year-old woman lay unresponsive. But when the 911 dispatcher says to start CPR, the nurse on the other end of the line refuses.

The nurse can be heard saying, "Yeah, we can't do CPR at this facility."

The dispatcher said, "Anybody there can do CPR. Give them the phone, please. ... This woman's not breathing enough. She's going to die if we don't get this started."

As the seconds tick by, the dispatcher tries desperately to convince the nurse to do something.

The dispatcher can be heard saying, "I don't understand why you're not willing to help this patient. Is there anybody that works there that's willing to do it?"

"Are we just going to let this lady die?" the dispatcher says.

The dispatcher says, "We can't wait. She can't wait right now. She is stopping breathing. Is there anybody there that's willing to help this lady and not let her die?"

The nurse replies, 'Um, not at this time."

By the time medics arrived, it was too late.

The Glenwood Gardens Retirement Facility released a statement saying it's "conducting a thorough review" but that, "...our practice is to immediately call emergency medical personnel for assistance and to wait with the individual needing attention until such personnel arrives."

An industry spokeswoman tells CBS News that's likely because this was an independent living facility -- not assisted living.

Maribeth Bersani, of the Assisted Living Federation of America, said, "There's no requirement that the people in the building be trained to perform CPR, so a company could state in a policy they don't want anyone to initiate CPR."

But she says this incident may be a wake-up call for the industry. Bersani said, "I think this tragic example will make us all think more closely about what type of services and training we should provide.

CBS News has been told the elderly woman in this case did not have a "do not resuscitate" order on file. However, her daughter reportedly says she's "satisfied" with the care her mother received.

For John Blackstone's full report, watch the video above.

The situation is morally reprehensible, according to CBS News legal analyst Jack Ford, but then the real question is, is there a legal responsibility and legal liability. He said, , and then, is there a legal liability. That depends upon two things: first is, what's the agreement that this woman and her family had with this home, and...it was a residential facility, not a nursing home, assisted living. Very different if it was that. So if their agreement they say specifically, 'We do not provide emergency medical care. We will get somebody for you,' then that could shield them from some problems. Then other question is, what are your reasonable expectations. When they sold this as a sales pitch, did they say, 'Look, we have wonderful workout facilities, wonderful dining facilities and we have medical people on site here.' Well, you know then, despite what might be in the agreement there, you have a reasonable expectation."

For more with Ford, click on the video below.

As for the woman, Ford said she was apparently told something as an employee. "She may well be in a tough position," Ford said. "If she was told by her employers, 'You cannot do this, if you do, you're in violation, and you'll lose your job.' Now you have a woman being told, do I try to save someone's life and by doing so, do I risk my own job for doing it. That's why you have to look to the employers. The reality is, some states, you are starting to pass Good Samaritan laws that say you can't be sued if you try to stop and help somebody, the reason is people sue you sometimes if you try to stop and help somebody. You have to look at the culture of society here, the litigious nature of society. It just -- it's a terrible tragedy."