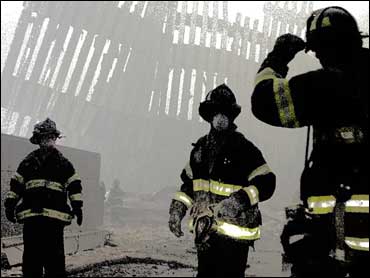 The Sept. 11 commission's final report won't declare that the worst terrorist attack in U.S. history was preventable, though some panelists said during the 20-month investigation they believed the hijackers could have been stopped.

In the end, the panel's five Democrats and five Republicans did not want to draw a conclusion on that major point, believing it could open the way to partisan sniping in a presidential election year.

"My personal view is that the intelligence system we have has been broken for a long time," said Republican commissioner John Lehman, a former Navy secretary. "But we wanted to let the American people make up their mind. They don't need our editorializing."

Mr. Bush will receive a summary by Thursday morning. The commission plans a briefing with relatives of the victims Thursday before the report is released.

In recent interviews with The Associated Press, commissioners said the report will fault Congress for poor oversight of intelligence gathering and criticize government agencies for their emergency responses to the 2001 attacks that killed nearly 3,000 people in New York, Washington and Pennsylvania.

The harshest criticism will be leveled at the FBI and CIA, with the panel citing poor information sharing and intelligence analysis as key factors that allowed the hijackers to carry out their plot. Both Kean and Hamilton have said the attacks conceivably could have been prevented had government officials done their jobs better.

Commissioners won't point to individuals in the Clinton or Bush administrations, instead laying out what they consider a factual accounting of events.

"What's worked for us all along is looking at what the facts are and not trying to put any spin," said Democratic commissioner Jamie Gorelick, a former deputy attorney general. "We will lay out the facts with as much particularity as we can."

However, several commissioners say those facts could lead readers to conclude the attacks were preventable had the government done a better job following up on intelligence tips and tracking the 19 hijackers, some of whom entered the country illegally.

There was skepticism from one group of victims' relatives, the Family Steering Committee for the 9/11 Independent Commission, on whether the commission's report would provide a full accounting of the facts behind the nations; worst terrorist attack.

"While we believe that our concerns were acknowledged, we had also hoped that more of our questions and those of the American public would be fully addressed during the public hearings, or at the very least, discussed in the prepared staff statements," the statement read. "Yet today, many of our collective questions remain unanswered."

There is also skepticism over whether the panel's findings will result in legislative action.

The panel is expected to call for a new intelligence executive who would have consolidated budget authority and the ability to oversee a shake-up of the nation's intelligence community.

A Senate committee found little consensus Tuesday on a proposal to establish a Cabinet-level chief of the nation's 15 intelligence agencies, indicating the idea could be a tough sell in Congress.

Saying he wants to avoid the law of unintended consequences, Senate Intelligence Chairman Pat Roberts, R-Kansas, asked, "What problems have we identified that will be solved by such an approach?"

Commissioners plan an aggressive lobbying effort to push recommended changes. The panel will split into bipartisan pairs and travel nationwide for speaking engagements and media appearances.

That lobbying campaign will continue into the fall, even after the commission formally dissolves on Aug. 26, with several members ready to testify should Congress choose to hold public hearings on the report's findings and recommendations, said commission spokesman Al Felzenberg.

"Commissioners have all said they hoped the report would not just go on a shelf as so many others have," Felzenberg said. "They said they hoped both presidential campaigns would endorse the recommendations and Congress would act."

Commissioners have said it is important for them to unanimously endorse the report so their findings and recommendations are not seen as partisan. A poll released Wednesday by the Pew Research Center for the People & the Press found 61 percent of Americans believe the commission has done a good job. The support was nearly even among Republicans and Democrats.

Still, the report is expected to provide fodder for arguments in the presidential campaign.

Advisers to Democratic candidate John Kerry have said they hope to use the report to show that in the summer of 2001 the Bush administration was inattentive to threats of a possible attack.

The Clinton administration, meanwhile, was under fresh scrutiny after federal authorities said they were investigating former National Security Adviser Sandy Berger in connection with the disappearance of highly classified terrorism documents.

As the report's release nears, Mr. Bush is defending his administration's efforts to secure the homeland.

On Wednesday in the Rose Garden, he signs a bill to develop and stockpile vaccines and other antidotes to biological and chemical weapons.

On Thursday, Mr. Bush is to sign the Law Enforcement Officers Safety Act, giving qualified off-duty and retired law enforcement officers the ability to carry their concealed firearms nationwide. Later on Thursday, Mr. Bush travels to Illinois to tour the Northeastern Illinois Public Training Academy in Glenview, and give a speech on homeland security.