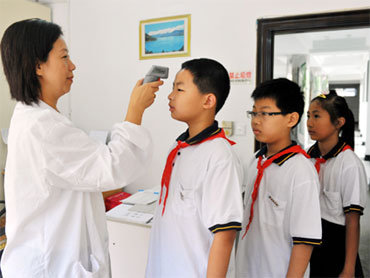 China has detected eight people infected with mutated forms of the H1N1 flu virus, a health official said Wednesday, but flu drugs and vaccines still work against it.

Flu viruses mutate easily, and scientists have been closing watching for signs that the H1N1 flu (also known as swine flu) virus is changing, which could make it more dangerous or more infectious.

Shu Yuelong, director of the Chinese National Influenza Center, told the official Xinhua News Agency that the mutated H1N1 flu virus found in China was in "isolated" cases in the mainland, is not resistant to drugs and can be prevented by vaccines.

The report did not provide any more details, such as when the cases were detected and if they were linked to any deaths. Calls to the National Influenza Center rang unanswered while the Health Ministry did not immediately respond to a faxed list of questions.

China has imposed some of the toughest measures in the world to prevent the spread of H1N1 flu. But many wonder whether or not they are working as well as the government claims, CBS News correspondent Celia Hatton reports.

The World Health Organization's spokeswoman in Beijing, Vivian Tan, said the agency had no information on the cases mentioned in the Xinhua report Wednesday.

On Friday, the WHO said it was looking into two deaths and one severe case linked to variant H1N1 flu in Norway, after that country's Institute of Public Health announced that the mutation could possibly cause more severe disease because it infects tissue deeper in the airway than usual.

The same mutation has been found in both fatal and mild cases elsewhere, including in Brazil, Japan, Mexico, Ukraine, and the United States, said the WHO.

Tan said the agency is aware of three such cases in China that occurred in June and July that were similar to the cases being investigated in Norway.

"We are concerned, but realize that influenza viruses, including A/H1N1, are relatively unstable and change easily, especially as they infect more people," Tan told The Associated Press. "Some mutations can have minimal effects on how a virus functions, while other mutations can create important changes with significant public health impact."

China's Health Ministry said Wednesday that 51 H1N1 flu deaths were reported last week, bringing the total number of fatalities in the country to 104.