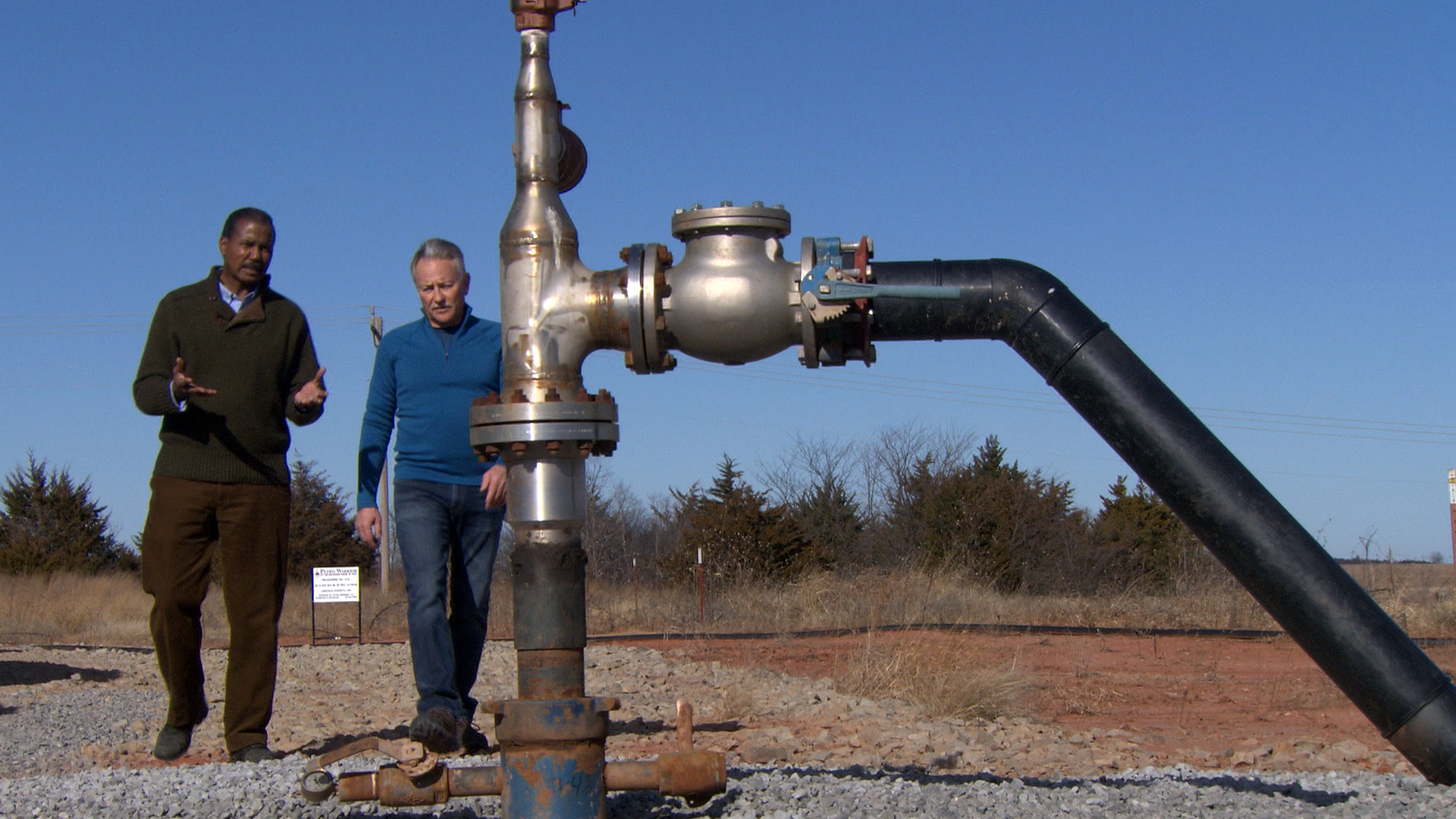 The following script is from "Earthquake Alley" which aired on May 8, 2016. Bill Whitaker is the correspondent. David Schneider, producer.

During this time of year, Oklahomans are accustomed to searching the skies for signs of tornadoes. Today, they're just as wary of the hazards coming from the ground beneath their feet. Tornado alley is now earthquake alley. Oklahoma is the most earthquake prone state in the continental US. What's more astonishing is that nearly all of Oklahoma's earthquakes are man-made. They are being triggered by the biggest and most important industry in the state: oil and gas production but it's not from fracking, which is what most people think. Before 2009, there were, on average, two earthquakes a year in Oklahoma that were magnitude 3 or greater. Last year, there were 907. That's right, 907.

The vast majority of earthquakes are small, causing little or no damage. But what they lack in punch, they make up in sheer volume. This tally from the U.S. Geological Survey shows the number of earthquakes in Oklahoma has increased every year since 2009 with more than 2,000 magnitude 3 and above. That means more of the bigger ones, like this 4.3 magnitude quake last December in Edmond, Oklahoma.

Melinda Olbert: I woke up scared to death, praying that the house wouldn't fall down. I couldn't believe that the windows didn't shatter.

Melinda Olbert and Kathy Matthews are neighbors in Edmond.

Melinda Olbert: What quake app do you use?

Kathy Matthews: I use the one...

They say they check their phone apps to track earthquakes around the state all day long.

Bill Whitaker: Look at that.

Bill Whitaker: All in one day?

Kathy Matthews: All in one 24-hour period; one hour ago, two hours ago, four hours ago.

Bill Whitaker: This must be unnerving.

Cornell University seismologist Katie Keranen was teaching in Oklahoma when the increase in quakes began. She says the situation is unprecedented.

Bill Whitaker: What's going on here in Oklahoma has never been seen before?

Katie Keranen: Just the number of earthquakes is astounding, but how fast it grew it is perhaps even more astounding.

Keranen and her student Catherine Lambert have set up equipment to detect extremely small quakes in an area where there haven't been many, hoping the small quakes might provide warnings of larger ones.

Katie Keranen: And so, so far we've only looked at data from four days of recording, and so we see small earthquakes in the area.

Bill Whitaker: Even over four days.

Katie Keranen: Even over four days, we actually see many dozens of earthquakes.

Keranen was among the first scientists to link the earthquakes to oil and gas production.

Bill Whitaker: These are man-made earthquakes.

Katie Keranen: Most people feel that the majority of these are linked to this water being disposed.

The water that's causing the earthquakes is not from fracking -- which is water and chemicals pumped underground to free up oil and gas. This is naturally occurring water that's been trapped below ground with the petroleum for millions of years.

Bill Whitaker: This is the oil being pumped out?

Gary LaRue is president of PetroWarrior, a small, independent oil company that operates 14 wells in Oklahoma. What happens in this cylinder is what happens on a grand scale at wells across the region: the oil, gas and water naturally separate.

Gary LaRue: So this'll be the saltwater here. This is gas up here.

Bill Whitaker: The bubbles going-- that's the gas. And look at that. The oil.

Like every other operator in the region, big and small, LaRue's oil wells produce more water than petroleum.

The gas and oil are collected in tanks for sale, but the water is too briny to be recycled or used. It's considered waste.

Bill Whitaker: And all of this is saltwater--

Gary LaRue: Saltwater. Uh-huh (affirm). So it has to go back in the ground. We have to get rid of it.

Getting rid of the water means sending it down a disposal well that's drilled deep below the freshwater aquifers -- to prevent their contamination -- and the zone where it came from.

Bill Whitaker: This is it?

Gary LaRue: This is it.

Bill Whitaker: This is what all the talk's about?

Gary LaRue: Just a well in the ground.

LaRue's disposal well is one of more than 3,000 in Oklahoma. The state created a website to explain the earthquakes -- this map shows disposal wells as blue dots. The orange dots are earthquakes. When the price of oil went over a hundred dollars a barrel in 2008, oil and gas production increased dramatically. So did the amount of wastewater and earthquakes.

Mark Zoback: What we've learned in Oklahoma is that the earthquakes that are occurring in enormous numbers are the result of wastewater injection.

Mark Zoback is professor of geophysics at Stanford University. Zoback says there are two factors behind the earthquakes. One is the large volumes of water being disposed and the other is where it all goes: deep down into a layer of earth called the Arbuckle.

Bill Whitaker: What makes this such a good place to dispose of all that water?

Mark Zoback: Well, it's very thick. It's porous, it's permeable so it can accommodate, you know, very large injection rates.

The only problem with the Arbuckle is that it sits directly on top of the crystalline basement -- a rock layer riddled with earthquake faults.

Bill Whitaker: So this water is seeping into the faults?

Earthquakes are now a daily occurrence in Oklahoma, but it was three quakes in November, 2011, near the town of Prague that caught everyone's attention. One was magnitude 5.6 -- the largest in Oklahoma's history. It toppled a spire at St. Gregory's University and severely damaged 14 houses, including the one where John and Jerri Loveland live with their two children.

Jerri Loveland: Our bed was shaking and all you could hear was glass.

John Loveland: You know, earthquake insurance is something that you don't ever think you're gonna have to have.

Like most Oklahomans, the Lovelands didn't have earthquake insurance and have been doing their own repairs to save money. More than four years after the quake, Jerri Loveland often resorts to simply hiding the damage.

Bill Whitaker: Doesn't that concern you? That you've got a crack like this--

Jerri Loveland: I'm afraid that if we went in and fixed these and then there was another earthquake, even a little, it's gonna crack it all and then you've done all that work for no reason.

Bill Whitaker: I'm not sure--

Bill Whitaker: --covering it is fixing it.

Jerri Loveland: It's not fixing it. But that's our only choice. It's not like we have the money to bulldoze the house down and start over. That'd be great. But it's not gonna happen. We have a mortgage. We live on one income. And I realize that that's our choice, but our choice was great when somebody else didn't screw our house up, so-- and that's proven fact that somebody did it. It's not a natural disaster.

Oil and gas is Oklahoma's largest industry -- you can see its importance to the state from the oil rig in front of the Capitol. In recent years, companies like SandRidge, Chesapeake, New Dominion and Devon Energy have employed nearly one of six workers in Oklahoma. All the companies declined to provide someone to speak to us. For years, Gov. Mary Fallin was skeptical the quakes were connected to oil and gas production. But as the number of quakes skyrocketed, she created an advisory council in 2014 to study the situation. Last summer, Fallin conceded a connection.

Gov. Mary Fallin: I think we all know now that there is a direct correlation between the increase of earthquakes that we've seen in Oklahoma with disposal wells...

Nonetheless, last year, the state cut the budget of the agencies investigating the quakes and regulating the oil and gas industry. Kim Hatfield of the Oklahoma Independent Petroleum Association sits on the governor's council. He did agree to an interview and insists the science is inconclusive.

Kim Hatfield: You have to understand that injection into the Arbuckle is not something that started in 2009, 2008, or even 2000. This is something that's been going on for 60, 70 years. And we've had-- had a sudden change. And the question is what changed.

The amount of wastewater injected into disposal wells last year is triple what it was in 2009, adding up to more than 200 billion gallons of water in seven years.

Bill Whitaker: The thing that's different is the amount of water that the oil industry is pumping into the Arbuckle Formation. That's what's different. And along with that difference comes these earthquakes. That's not the trigger?

Kim Hatfield: The injection of water is a factor. But it is not possibly the only factor. We don't know.

Bill Whitaker: So-- so what more needs to be done?

Kim Hatfield: We need to understand this issue. It's not as simple as saying, "Well, let's just stop injecting water." The energy industry is very important to the state.

Mike Teague: If it's your house that's shaking there is no way that we're moving fast enough.

Mike Teague is Oklahoma's Secretary of Energy and Environment. He's got the tough job of protecting Oklahoma's anxious citizens without damaging it's most important industry.

Bill Whitaker: So what have you concluded is the cause?

Bill Whitaker: How do you balance out the economic benefit of the gas and oil industry and the public safety?

Mike Teague: I don't think it's a balance. I think public safety has to take precedence.

Mark Zoback from Stanford has been working with Mike Teague and the state earthquake council for more than a year.

Mark Zoback: Lowering the total amount of salt water injection into the Arbuckle is the only way that these earthquakes are gonna start to subside.

Bill Whitaker: Do they have time?

This winter, the state called for widespread voluntary reductions in wastewater disposal by as much as 45 percent in earthquake zones. More than 600 wells are covered by the cutbacks. Last year, when neighboring Kansas had similar seismic activity, it reduced oil wastewater disposal and saw a 60 percent drop in quakes from the year before. But considering the huge volume of water already pumped underground in Oklahoma, it's too early to know whether the cuts here will succeed. Nowhere is the need for action more urgent than Cushing, Oklahoma.

Cushing is home to the nation's largest crude oil storage and pipeline facilities which the Department of Homeland Security calls critical infrastructure. The complex was rocked by a series of earthquakes last fall.

Bill Whitaker: Now the state has asked you to stop putting so much water down.

Gary LaRue: They did a voluntary action. We're six miles away from Cushing over there..

Gary LaRue: $30 a barrel, if we have to cut our production in half because of restrictions they put on us, we're done.

Bill Whitaker: You're out of business?

Gary LaRue: Yeah, we won't be drilling wells, we won't be employing local people to do our service work, we're done. It will drive us out.

Just two weeks ago, LaRue abandoned one of his 14 wells to comply with the cutbacks.

Melinda Olbert: We may be talking about trucking it 30 miles away. I think that could be done.

More and more, scientists are realizing that the differences between the sexes are dangerously understudied