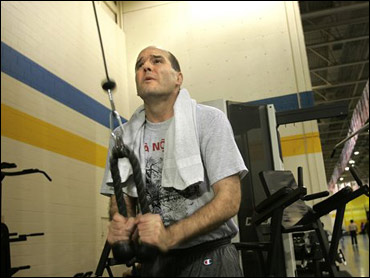 Sixty to 90 minutes of exercise? Every day? That's what the government now suggests.

Even people working out at the gym say most folks won't consider that, and the experts behind the government's recommendation say 30 minutes a day is enough for most.

Paul Steinkoenig, 45, of Arlington, Va., now works out about 90 minutes a day three days a week. Sixty or 90 minutes every day "sounds higher than certainly what the average American is going to consider," he said while using weight machines that the Thomas Jefferson Community Center in Arlington.

"I think 60 minutes would be a little much for me," added Joseph Allwein, 84, who was pedaling a stationary bike at the center. Allwein said he bikes, rows or walks for 30 minutes five days a week.

The panel of doctors and scientists that developed the recommendations put an emphasis on getting 30 minutes of exercise. But its 25 pages of recommendations were scaled down to three when they were released as part of the government's new dietary guidelines in January. Those guidelines gave equal billing to the 60- and 90-minute suggestions.

"There's an enormous need to clarify that," said Russell Pate, a panel member and professor of exercise science at the University of South Carolina school of public health. "I have no doubt that if we all met that 30-minute guideline, we'd have a lot fewer of us that have weight problems."

The guidelines are being used to update the government's food pyramid, which is due out this spring. This is what they say about exercise:

People need 30 minutes of physical activity on most days to ward off chronic disease.

To prevent unhealthy weight gain, people should spend 60 minutes on physical activity on most days.

Previously overweight people who have lost weight may need 60 to 90 minutes of exercise to keep the weight off.

Pate said it was a mistake not to tie the half-hour recommendation to people's weight.

Weight is an issue throughout the guidelines, which tell people how to eat to be healthy. Overall, the guidelines advise eating fewer calories, more fruits, vegetables and whole grains. People should also drink more lowfat milk, eat less fat and salt and get more exercise.

The number of overweight and obese Americans is growing at an alarming rate, the panel said, which is why they included the advice recommending 60 and 90-minute daily exercise regimes in their report.

Up to 90 minutes a day is required for people who, since they were overweight, may have a more demanding metabolism, said Dr. Janet King, the panel's chair and a scientist at Children's Hospital Oakland Research Institute.

About two-thirds of Americans each year try to start regular exercise programs, according to a 2004 Associated Press-Ipsos poll. That contrasts with how many stay with it. Nearly 40 percent of adults said they didn't do physical activity during leisure time in 2002 data from the federal Centers for Disease Control and Prevention.

People trying to fit the new exercise advice into their day don't have to start all at once. It's fine to break your activity into bouts of 10 or 15 minutes. But the idea is still to do at least 30 minutes of moderate physical activity — the equivalent of walking briskly, at about 3.5 miles an hour.

Try walking your dog in the park for 15 minutes in the morning and walking on a treadmill for 15 minutes in the evening, or take a walk at lunchtime, Pi-Sunyer said. "You don't have to change, put on a sweat suit, take a shower. You're not going to work up a big sweat, and you can go back to work," he said.

And it doesn't have to be walking. The panel gave several examples of moderate exercise: Hiking, light gardening or yard work, dancing, golf, bicycling, a light workout of weight lifting. Stretching also counts.

"The idea here is small steps," said Eric Hentges, director of the Agriculture Department's Center for Nutrition Policy and Promotion, which helped write the guidelines. "Get the 30 minutes first, because independent of any of the other aspects, the 30 minutes alone will have benefits."