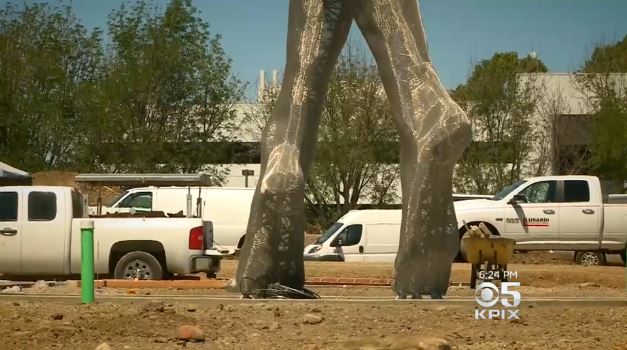 SAN LEANDRO, California -- A new 55-foot tall statue is taking shape on the brand new San Leandro tech campus, but some locals are raising questions about whether the giant nude woman is appropriate public art.

CBS San Francisco reports that so far, only a pair of nicely shaped lower legs have been raised. It's the rest of the sculpture called "Truth Is Beauty" that is eliciting some mixed reviews

"You know how some people are. Some people don't want to see nobody naked. Not even a bird," said San Leandro resident William Eckels

The statue of a nude female form with a graceful dancer's body, her arms outstretched and reaching skyward, made its debut at Burning Man three years ago.

Some think it's a welcome addition to San Leandro's new tech campus.

"I didn't think of it as offensive in any way, because it's just a woman posing who happens to be naked, said supporter Breana Lankford. "And it's pretty see through, so it's not like there's going to be any explicit details."

The city required the developer to include public art at the new campus.

And since the design was unveiled, City Manager Chris Zappata said supporters have outnumbered opponents two to one.

"There is a dearth of representation of women in the tech industry," said Zappata. "And this hopefully will start to bring attention to that problem as well as bring public art to our community."

The rest of the sculpture will arrive in mid-October, likely draped in the same patchwork of praise and criticism that greeted its announcement.

"I really liked it. I think it's a beautiful sculpture. Obviously, the artist is extremely talented. But I'm not sure it's appropriate for public display," said area resident Sally Wrye. "I think it's better suited for a museum where people have the option about whether that's something they want their children to view."