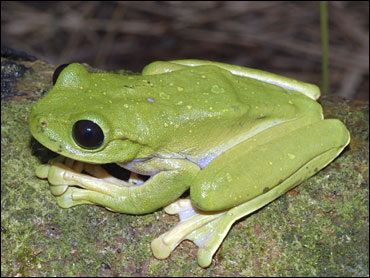 A brilliant green tree frog with huge black eyes, jumping spiders and a striped gecko are among more than 50 new animal species scientists have discovered in a remote, mountainous region of Papua New Guinea.

The discoveries were announced Wednesday by Washington D.C.-based Conservation International, which spent the past several months analyzing more than 600 animal species the group found during its expedition to the South Pacific island nation in July and August.

Of the animals discovered, 50 spider species, three frogs and a gecko appear to have never been described in scientific literature before, the conservation group said. The new frogs include a tiny brown animal with a sharp chirp, a bug-eyed bright green tree frog and another frog with a loud ringing call. One of the jumping spiders is shiny and pale green, while another is furry and brown.

The findings are significant, particularly the discovery of the new frog species, said Craig Franklin, a zoology professor at The University of Queensland in Australia who studies frogs.

"They're often regarded as a great bioindicator of environmental health," said Franklin, who was not involved in the expedition. "Often we see declines in frogs as a direct pointer to an affected environment."

The area the researchers explored provides a critical source of clean drinking water to tens of thousands of people living in surrounding communities and local clans rely on the region for hunting.

Montclair State University anthropologist William Thomas worked with the local Hewa clan to document the area's resources during the expedition as part of a project he started with scientist Bruce Beehler of Conservation International.

Conservation International plans to conduct three more expeditions to Papua New Guinea this year, in the hopes of turning up even more new animals.

"Most of us live in urban worlds where we think everything's totally well known," Beehler said. "It's a little bit of a reminder, just a wake up call, that we really need to know our world better so we can manage it better."