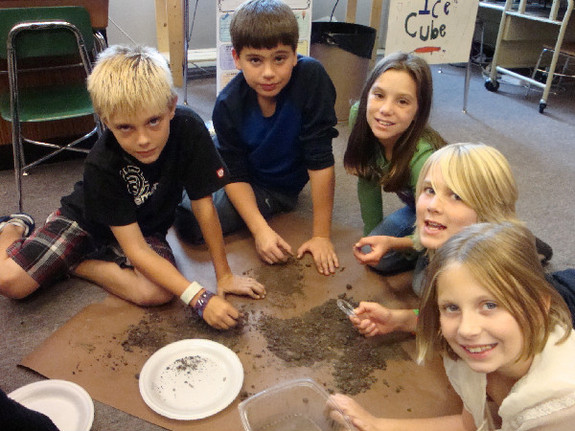 Earlier this year, Linda Azaroff's fourth-grade class received a 2.2-pound (1-kilogram) box containing what one student described as a "clump of dirt."

But this wasn't just any dirt — it was sediment, or matrix, collected from a backyard in Hyde Park, N.Y., in 2000, where a project to deepen a backyard pond uncovered the remains of a mastodon — an extinct elephantlike animal. Working under a deadline, but not wanting to miss any important pieces, excavators carted away about 22,000 pounds (10,000 kg) of matrix from around the bones, more than they could realistically sort through in the years to come. (25 Amazing Ancient Beasts)

The excavators turned to citizen scientists volunteering for the Mastodon Matrix Project, which enlists school classes, hobbyists, families and other volunteers scour the matrix from mastodon excavations. Since 2008 alone, more than 3,500 participants from around the U.S. have worked on matrix from Hyde Park.

"One of the huge limiting things form a scientific standpoint is we often don't have the staff time either from interns or scientists themselves to go through all of this stuff," said Carlyn Buckler, an education and outreach associate at the Paleontological Research Institution (PRI), which operates the Mastodon Matrix Project. "The more data we can get, the more complete a picture we will come up with about the environment."

This approach isn't unique; students and other citizen scientists can contribute their time and effort to a variety of projects, from recording road kill to counting stars. In return, volunteers get hands-on experience with science and the chance to contribute to real research projects.

Now the fourth-graders at Landisville Intermediate Center in Pennsylvania had a chance to become paleontologists, and they had plenty of expectations about what they would find in the matrix.

"I thought we'd find some teeth," said Ian Stringer. "I thought we were going to find some small bones and wings of a butterfly, maybe," said Nolan Deck. "Plants or leaves and sticks," said Melissa Grube.

The matrix arrived with a set of instructions that guided the class through the same basic process — such as sifting through samples with their fingers and toothpicks — professional paleontologists would use as they searched for bits of the 11,500-year-old mastodon along with shells, twigs, seeds and other fossils. The finds were weighed, bagged and returned to PRI in New York.

A fourth-grade class doesn’t typically have the most sophisticated scientific equipment, but the students were armed with plastic magnifying glasses.

"We found these tiny shells that were swirly and white," said Caitlyn Cazad during a Skype video interview with LiveScience. "Some of them would break easily."

"I found a big stick, it looked a little like a root, it had little things coming off it," said Jack Reichler.

The students all agreed on their favorite find: an 8-inch long hair that turned up in Elliot De La Torre's matrix. He described it as black and really stiff.

"It could not have been a human hair," he said.

All of the students examined the hair, which had been embedded in the soil, through their magnifying glasses and found that it did not resemble human, dog or cat hair, Azaroff recounted. The conclusion was unavoidable: It came from the mastodon.

"The children felt they had touched and handled something that was thousands of years old," she wrote in an email.

Others have found hairs in their matrix samples, however, few have been positively identified as a mastodon's, according to Buckler. It's possible the hairs could have come from a number of mammals living at the time, she wrote in an email.

Once PRI receives sorted samples, researchers further identify what they have found, naming twigs or shells by species, for example. Everything is catalogued and some items join a reference collection from the excavation. Researchers with questions about life or the environment during this time can look to this collection for answers.

An assessment of 36 samples returned from citizen scientists found that, after some additional sorting and corrections, the volunteers turned up similar results to those that paleontologists would find. The researchers found the abundance of finds in broad categories — such as total mollusks — varied depending on students' recognition of objects, their thoroughness, and, most likely, how they processed the samples. But within the broad categories, the abundance of specific types of organisms — such as types of freshwater mollusks — appeared consistent, both among most citizen scientist samples and with professionals' work on similar samples.

Part of the goal of the Mastodon Matrix project is to give students and the public an opportunity to scour the dirt and attempt to answer open-ended questions about its content, just like scientists. For Ms. Azaroff's class, the experience appeared to have left quite an impression. Half a year after returning their sample, the students remembered their work vividly.

"The hardest part was probably actually seeing the stuff," because it's so tiny, said Ben Henry. "The best part was trying to figure out what things were there because I really never saw those things in my life before," said Diamondli Lopez. "I liked it when I got dirty," said Kyle Luong.

The Mastodon Matrix Project — which uses samples from three excavations — began in 1999 as a collaboration between PRI and Cornell University, after the excavation of a mastodon in Chemung County, N.Y., that fall.