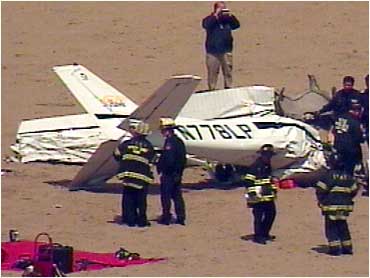 Four people were killed Saturday afternoon when a single-engine plane crashed on the beach in Coney Island, hitting the sand as stunned sunbathers looked on, officials said. There was no immediate word of additional injuries.

The four victims, all on board the Cessna, were dead at the scene following the 1:30 p.m. crash at the popular Brooklyn beach, said Federal Aviation Administration spokeswoman Holly Baker. Police and fire officials were at the scene, where the shattered aircraft remained on the beach.

"It looks like it came down nose-first," said Dick Zigun, a Coney Island resident who was at the crash site. "The wings are broken off, and the cockpit glass was smashed up. It didn't look like anyone could survive that."

Zigun, who has lived in Coney Island for 25 years, said it was the first plane crash on the beach that he could recall. Several sunbathers were on the beach when the plane came down, although the Coney Island crowd was generally sparse, he said.

Police and fire officials moved quickly to close off the beach after the crash, he added.

The crash occurred on a sunny spring day at the world-renowned beach, home to the Cyclone rollercoaster and the Astroland amusement park. The plane hit the beach near West 19th Street, close to KeySpan Park, a minor league baseball stadium.

The famous beach and boardwalk in Brooklyn hosts tens of thousands of New Yorkers during the summer months, and its more famous visitors in the past included Charles Lindbergh and Sigmund Freud.