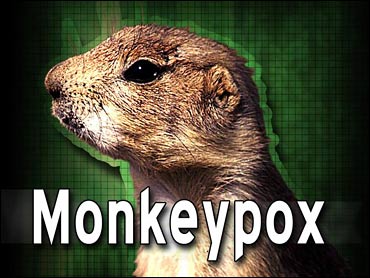 Health officials investigating an outbreak of monkeypox that apparently spread from pet prairie dogs to people said Monday the number of reported cases has risen to at least 37, including four that have been confirmed.

It is the first time monkeypox, a smallpox-related virus normally found in Africa, has ever appeared in the United States, according to the Centers for Disease Control and Prevention. Seven people have been hospitalized; no one has died.

Steve Ostroff, deputy director of the CDC's National Center for Infectious Diseases, said he expects the numbers to rise as human and animal samples are tested.

But Ostroff said that only people who had direct contact with infected prairie dogs, or in one case a rabbit, have come down with the illness.

"For the average citizen, I would not necessarily be concerned at this point of being exposed to monkeypox," he said.

State health officials have reported 16 suspected cases in Wisconsin, 13 in Indiana and four in Illinois. Four cases have been confirmed in Wisconsin and Illinois.

There have been no instances in this outbreak of the virus being spread from person to person, though that has happened in Africa in the past.

Investigators said the prairie dogs were probably infected with the virus by a Gambian giant rat, which is native to Africa, at a Chicago-area pet distributor.

The Illinois Department of Agriculture, along with state and federal health officials, is trying to track down 115 customers - both individuals and pet stores - that bought exotic animals from Phil's Pocket Pets since April 15.

The distributor, Phillip Moberley, said Monday that he voluntarily quarantined his home-based business and put to death 70 prairie dogs. A 24-year-old employee of Moberley's has Illinois' only confirmed case of monkeypox.

The outbreak is the latest in a long history of serious infections moving from animals to people. SARS is thought to have spread from wild civet cats to people in China. Other examples include West Nile virus, which spread from birds, and AIDS, which moved from chimpanzees.

Monkeypox in humans is not usually fatal but causes rashes, fevers and chills. Doctors initially feared they might be facing smallpox, which causes similar symptoms.

Two patients at Froedtert Memorial Lutheran Hospital in Milwaukee were reported in satisfactory condition Sunday. The two were isolated, and doctors treating them wore caps, gowns and masks. Other suspected victims were treated and released.

The human mortality rate from monkeypox in Africa has ranged from 1 percent to 10 percent, but the virus may be less lethal in the United States because people are typically better nourished and medical technology is far more advanced.

Ostroff said the CDC is studying whether to use the smallpox vaccine, which has been effective on monkeypox, to combat the U.S. outbreak.

Health officials are trying to contain the virus by preventing more animals from becoming infected.

Wisconsin's Department of Agriculture warned people not to release their pet prairie dogs into the wild. The agency also told state humane societies to isolate any prairie dogs people bring in.

Both Wisconsin and Illinois have banned the sale, importation and display of prairie dogs. The Illinois ban also covers Gambian rats.

The popularity of prairie dogs as pets has grown in recent years. Last year 10,000 prairie dogs were shipped out of Texas to become pets, said David Crawford, executive director of the Rocky Mountain Animal Defense.