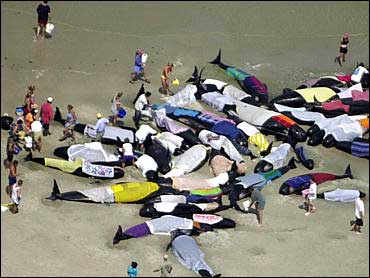 Thirty-six whales beached themselves on the coast of this Caribbean island and died within hours despite the efforts of people who tried to push some back out to sea.

The short-finned pilot whales were believed to have beached themselves Monday night, and by noon Tuesday all were dead.

The animals were found before dawn by a man on his way to a dump in the French Caribbean territory, which shares an island with Dutch St. Maarten. Residents and tourists later gathered around the whales, which were up to 15 feet long.

People were able to push two whales back into the water, but they returned and beached themselves again, appearing exhausted, said Paul Ellinger, of the St. Maarten Nature Foundation. He said it seemed the whales had become disoriented.

"What's clear is that they got off course. What caused them to go off course? We'll have to check," Ellinger said. "It could be all kinds of reasons; the temperature of the water, their sonar system. It could have been anything."

The whales covered the beach along the shallow Grand Cailles Bay, the mouth of which is fringed with coral reefs. The whales bore injuries apparently sustained when they ran aground.

French police arrived Tuesday morning and closed off the spot as workers dug beachside graves to bury the remaining whales.