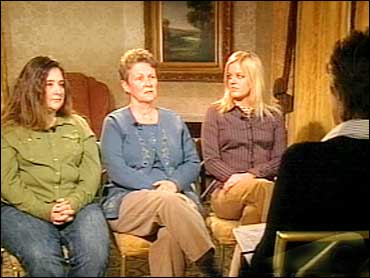 Airline pilot Jeffrey Blackwell is expected in federal court Tuesday in Albuquerque, N.M., to face 15 federal charges of making threats and stalking women across the country.

Three women who got calls attributed to Blackwell apppeared on The Early Show to discuss their experiences.

At 5:30 in the morning on New Year's Day, 2002, Kristy Johnson picked up her ringing cell phone - curious about who would call so early. A polite man asked, "Is this Kristy?" She answered "Yes." And he proceeded to say, "Now I want you to listen to me and you better listen to me because I'm going to find you, Kristy, and I'm going to rape you."

Carroll Smith thought she was talking to the best solicitor she'd ever heard when she answered the phone at 5:30 a.m. the next month.

"And then this very subtle change in voice that became predatory and menacing," Smith says, recalling that the caller's words were, "Listen to me carefully. I'm right outside your house." So she says she hung up.

Chasity Smith received an early phone call, too. "Very polite speaking" was the way she described the caller until he told her, "I'm right downstairs, right outside. Maybe not today, but I'm gonna rape you."

Police say the three - a college student, a teacher, and an accountant living in three different states - were all terrorized by the same man.

"It scared me to death," says Chasity Smith, saying it shattered her sense of security.

"That one phone call, it made me question everything," she adds.

Kristy Johnson says, "It's something that's extremely violating. It makes you, like Chasity says, question your security, your safety."

Johnson and Chasity Smith each received one call; Carroll Smith got three.

"I got the distinct impression he was extremely angry and extremely dangerous," said Carroll Smith, noting that his voice got angrier when, on the third call, she told him she would call the police.

Johnson and Chasity Smith filed reports with their local police departments. Both were told it was probably just a prank call.

But officer Martin Smith, with the Albuquerque Police Department, believed it was more.

"I actually talked to him, and he kind of scared me," says officer Smith.

On May 8, 2002, Officer Smith answered a radio dispatch on an obscene phone call received by a woman named Megan.

"When I first made contact with Megan she was crying, shaking," Officer Smith recalls.

The caller threatened to rape and murder her - and he seemed to know a lot about her.

As he was taking his report, the phone rang again.

Megan handed him the phone, and Officer Smith heard the caller say, "You don't understand, I've been following you. If you hang up, I'll come over and make it twice as worse, I'll rape you twice as bad. And then I'll kill you, that I've done it before and nobody will ever find your body."

Officer Smith confronted the caller, who promptly hung up.

He dialed "call trace" to find the caller's number and tracked it down. He learned the call originated from a calling card purchased at a Sam's Club - in Maryland.

The member's card used to purchase the phone card belonged to Jeffrey Blackwell.

"He covered his tracks pretty well by calling victims from one state to the other," officer Smith says.

But officer Smith found 28 more victims from all over the country. Each had received similar threatening phone calls.

"They were always looking in their back seat, looking over their shoulder, looking out the door before they ever walked out," he says.

Carroll Smith says, "It was really a relief when the officer called because it meant that other people, other women, were safe."

She says she will be happy when Blackwell is in jail.

Blackwell, who was arrested Nov. 15, 2002, was a pilot for Southwest Airlines. He is married and has a son. Blackwell has pleaded not guilty to all 15 federal charges.

Johnson fears that some people may not take it seriously enough because it was a phone call. "But the truth of the matter is that it's - it's a threat and it's not something to be taken lightly," she says.

Carroll Smith says, "My greatest fear is that he won't be punished at all. Because he is an airline pilot. There is a level of intelligence that you normally do not associate with this kind of behavior."

She says it is comforting to talk about it with Johnson and Chasity Smith. "Even though they are a lot younger than I am, you get this feeling of a shared experience and it feels good. It's nice to know that you're not alone in this experience.

"Because it was not a nice experience," Carroll Smith says.