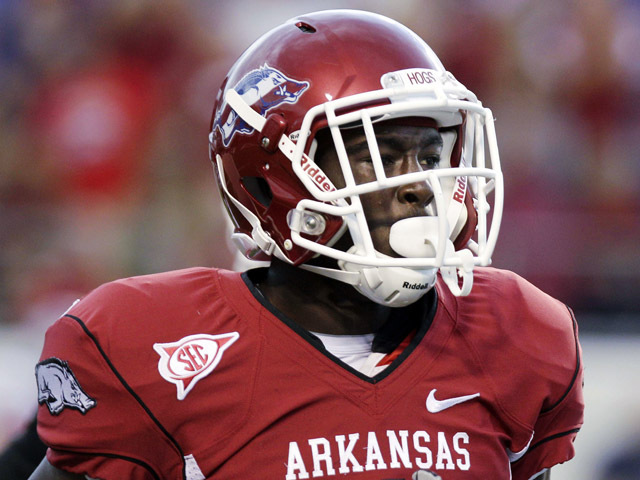 University of Arkansas police arrested Wade, Humphrey and tight end Andrew Peterson after looking at security video in which the players allegedly walked into rooms where items had been taken. The preliminary police report valued the stolen property, including computers and textbooks, at nearly $5,000.

"We have high standards for our student-athletes, and I expect them to conduct themselves appropriately," Smith said. "Poor conduct and misbehavior will not be tolerated and is not what we expect from the University of Arkansas football program."

Six Razorback players have been arrested since March, and Saturday's arrests add to what has already been a difficult spring for Arkansas, which was 11-2 last season and finished the season ranked No. 5 after a Cotton Bowl win over Kansas State.

Petrino was fired April 10 after initially trying to cover up the fact he was riding with his mistress during an April 1 motorcycle accident. The married father of four later admitted to an inappropriate relationship with Jessica Dorrell, who Petrino had hired to work in the football department and had given $20,000 in gifts.

In mid-March, offensive tackle Jason Peacock was arrested and charged with using a stolen debit card to buy $35 worth of gas. Wide receiver Kane Whitehurst was charged with possession of a controlled substance and drug paraphernalia in early April, and linebacker Tyler Gilbert was arrested in mid-April for allegedly taking part in an apartment break-in.

Wade, a sophomore, is the top returning player of the three — Humphrey is a junior and Peterson is a redshirt freshman — after finishing with eight catches for 62 yards last season. He was one of Arkansas' top offensive threats during its recently completed spring practice, finishing with five touchdown catches during one scrimmage, and was being counted on to replace the three former Razorbacks receivers (Joe Adams, Jarius Wright and Greg Childs) who were taken in the fourth round of the NFL draft.

Wade was also one of Arkansas' top special teams' players last season, averaging 25.6 yards per kickoff return and returning one kick 85 yards for a touchdown.

He was suspended for the Razorbacks' game against South Carolina after being ejected for a late hit on a Vanderbilt punt returner, leveling the Commodores' Jonathan Krause as he was looking up before he had the ball. Wade later apologized for the hit, but only after he was ejected and escorted off the field upon becoming animated.

The burglary case began after an Arkansas student reported on May 1 that her laptop had been stolen from her unlocked dorm room. Over the next seven days, police had a total of 10 reports of stolen items, including cash and DVDs, from four different dorm buildings.

The police reviewed security video from the dorms and said they observed Wade, Humphrey and Peterson walking the hallways, checking doors and entering rooms. Police also said a witness saw Peterson and Humphrey opening doors, and police said another witness identified Peterson as having been in her room

Some of the stolen items were recovered from a bookstore near campus, along with in Peterson's room, and the report said a store clerk identified the three as regularly selling used items.

Records from the Washington County Jail indicate the players have a court hearing on Monday. The records do not indicate whether they have attorneys.

Smith was hired April 23 to replace Petrino, and the former Michigan State and Louisville head coach had been an assistant at Arkansas before leaving in December to become the head coach at Weber State, his alma mater. He signed a 10-month, $850,000 contract with the Razorbacks, which allows Arkansas to retain its current coaching staff and pursue a long-term coaching solution.

Several Arkansas players were thrilled about Smith's return, calling him a "players' coach" and welcoming his personable attitude — a change from the tight-lipped Petrino.