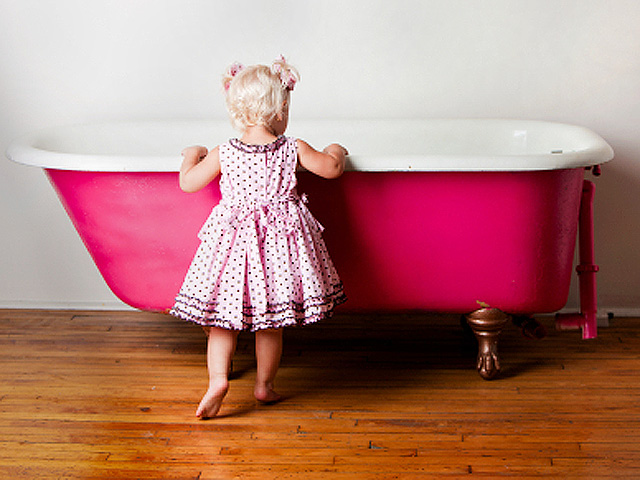 The child left his mother's sight for mere minutes. Yet that was enough time for 21-month-old Ollie Hebb to fall into the top-loading washing machine and become submerged in a full tub. The Utah boy died a day later, after suffering severe brain damage.

Between 2005 and 2009, two children under the age of five died as a result of laundry room accidents, according to the Consumer Product Safety Commission. Washing machine-related injuries are more common than deaths, says Scott Wolfson, director of public affairs for the CPSC. Aside from drowning, children may suffer burns from hot water in the machine, or injuries to their limbs if they come into contact with a rapidly spinning basin. "Kids are curious. We have to be very vigilant about our children, and really live in the moment and be present when we're supervising them," says Kate Carr, president of Safe Kids Worldwide, which aims to prevent unintentional childhood injuries.

Washing machines aren't the only hidden dangers lurking in homes. From Angela Haupt at U.S. News, here are 5 others to be cautious of...

Drowning concerns extend beyond swimming pools. Any type of standing water - even if it's just an inch deep - can harm a child. "The bathroom is the riskiest room in the house," says Garry Gardner, chair of the American Academy of Pediatrics' council on injury, violence, and poison prevention. "Children lean over and look into the toilet or bathtub, they trip, and they fall in." Keep young children out of the bathroom unless they're being closely watched, and teach others in the home to keep the bathroom door closed at all times. Ice chests with melted ice, water buckets or pails, and whirlpools also pose risks. Empty all buckets, pails, and bathtubs completely after use; never leave them filled or unattended. And adjust the water heater thermostat so that the hottest temperature at the faucet is 120 degrees Fahrenheit, to help avoid burns.

More from U.S. News: How to have a happier, healthier and smarter baby

Between 2000 and 2010, nearly 170 children ages 8 and younger were fatally crushed by falling TVs, the CPSC reports One child, for example, bumped a 100-pound TV that was placed on an aquarium stand. When it fell, it crushed his skull. The best preventative step? Using adequately-sized, sturdy stands and shelves to support TVs. They should not be placed on stands that have drawers, since kids could use them as steps to climb to the top, and parents shouldn't put remote controls, toys, or anything else atop TV sets. "We're seeing a mini-epidemic," Gardner says. "If a TV is heavy and sitting on a small stand, and a kid climbs up on it, he's going to pull it right over."

These high-powered lithium batteries, no bigger than a nickle, are used to power small electronic devices, including remote controls, watches, musical greeting cards, and ornaments. When accidentally swallowed, they can get stuck in the esophagus and generate an electrical current that causes severe chemical burns and tissue damage. "The window of opportunity for getting it out before it causes irreparable damage is two hours," Gardner says. If you're even remotely concerned that your child has ingested one of the batteries, head to the emergency room immediately.

In 2009, Mike Tyson's 4-year-old daughter was strangled to death by a dangling treadmill cord. And it wasn't an isolated accident. More than 25,000 children under age 14 are injured each year by exercise equipment, including stationary bikes, treadmills, and stair climbers. Treadmill injuries are typically caused by the moving parts (like the running deck and belt), hard edges, and programmed speeds. Some precautionary steps: When a treadmill isn't in use, unplug it and lock it up, or even surround it with a safety gate. Remove the safety clip that's tied around the handrail. Keep kids away from the machine whenever it's in use.

Be wary of where you set down that morning cup of joe. A child could accidently tip it over. Burns, especially scalds from hot water and other liquids, are some of the most common childhood accidents. "Kids are not small adults. Because they're growing, their skin is more fragile," Carr says. "And their body surface is much smaller, so a little bit of coffee goes a long way."