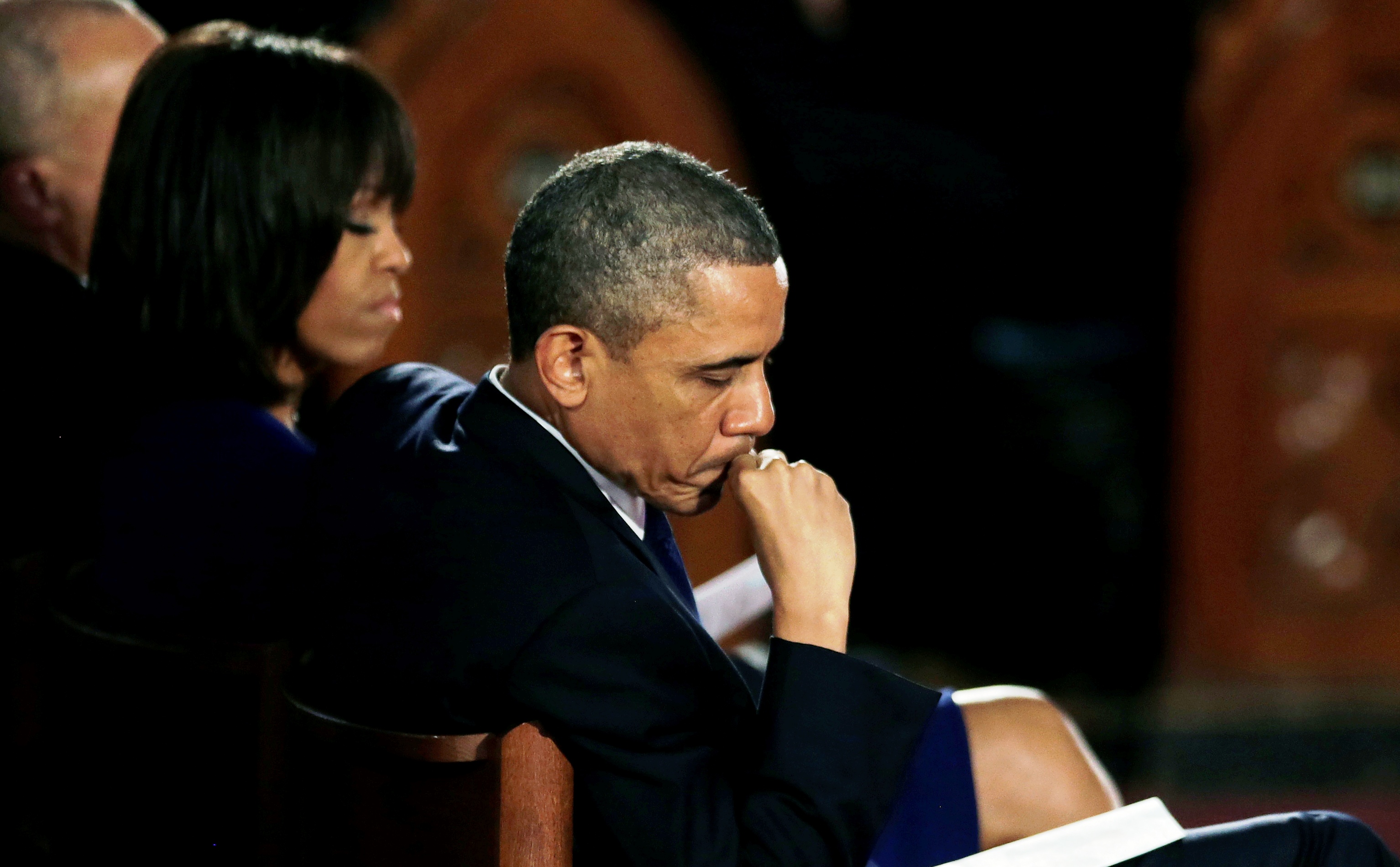 Americans as a people "refuse to be terrorized," President Obama assured Tuesday, one day after twin bombs at the Boston Marathon left three of them dead and more than 100 others seriously wounded. On Thursday morning he spoke in Boston at an interfaith vigil honoring the victims of an attack being termed an act of "terror" but about which otherwise little is yet understood.

"Consoler-in-chief": It's a role the president is familiar with, having been cast in it multiple times over the course of his first four years in the White House.

There was the mass shooting in 2009 at the Fort Hood, Texas army base, which killed 13 and injured 30. The 2011 assassination attempt of then-Rep. Gabrielle Giffords in Tucson, killed six and hurt 13 others. Last summer, a gunman sprayed a movie theater in Aurora, Colo., with bullets, leaving 12 dead and almost 60 others gravely wounded. And then there was Newtown, Conn. - a massacre at Sandy Hook Elementary School that killed 20 first-graders and six of their educators - hurtling into the spotlight the most potentially roiling debate over gun control in decades.

Anew in his second term, Mr. Obama stood Thursday on a stage set that begged that tried-and-true consoler costume, but offered a script yet unknown to him: No defined suspects, no cut-and-dried crime scene, no natural transition to a political fight as catharsis for the victims. The Boston bombings were sheer terrorism.

He had history as a guide. Following Giffords's shooting in 2011, the New York Times published a piece called "Executive Consolation," outlining moments of despair that have tried presidents "as they try to strike a precise balance of resolve and sympathy."

On the evening of Sept. 11, 2001, President George W. Bush from the Oval Office vowed to crack down on terrorism; three days later at Ground Zero, wielding a bullhorn, he responded to a worker who cried, "We can't hear you," pledging, "The rest of the world hears you - and the people who knocked these buildings down will hear all of us soon!"

In 1995, President Bill Clinton invoked scripture from the Bible to soothe a nation unnerved by the Oklahoma City bombing, and urged Americans to "overcome evil with good."

President Ronald Reagan in 1986, after an entire country had watched the space shuttle Challenger explode with seven astronauts on board, made the case that their work was not in vain: "I know it is hard to understand, but sometimes painful things like this happen," he said. "It's all part of the process of exploration and discovery. It's all part of taking a chance and expanding man's horizons. The future doesn't belong to the fainthearted; it belongs to the brave."

Ahead of the Gipper's '86 address, R.W. Apple Jr. of the New York Times explained the president would have to "identify with the ensuing national grief - lead the mourning, in a sense - but he must also confine it and direct it," else the nation's mood would "evolve into a sense of national despair and futility." Almost 30 years later, Mr. Obama bore the same task.

With a nod to Bill Iffrig, the 78-year-old marathon runner who was captured on video tumbling to the ground in the blast's rumble, the president's remarks on Thursday read more like a pep rally than a pep talk: "We may be momentarily knocked off our feet, but we'll pick ourselves up. We'll keep going. We will finish the race," he said.

"That's our strength," Mr. Obama continued, offering both a comforting hand to those shaken by the tragedy as well as a cautioning resolution to the threatening ethereal. "That's why a bomb can't beat us. That's why we don't hunker down. That's why we don't cower in fear - we carry on. We race. We strive. We build and we work and we love and we raise kids to do the same.

"We come together to celebrate life," he went on. "And to walk our cities, and to cheer for our teams. When the Sox, the Celtics, the Patriots or Bruins are champions again - to the chagrin of New York and Chicago fans - the crowds will gather and watch a parade go to Boyleston Street, and this time next year on the third Monday in April, the world will return to this great American city to run harder than ever, and to cheer even louder than ever for the 118th Boston Marathon."

Facing a room full of parents, siblings, classmates and teachers of the 26 victims who died December 14 in a mass shooting at Sandy Hook Elementary School in Newtown, Conn., President Obama asked two days after the tragedy if Americans can claim as a nation that they're doing everything they can to ensure the safety and happiness of their children.

"If we're honest with ourselves, the answer is no," the president said during an interfaith vigil at Newtown High School. "We're not doing enough. And we'll have to change."

It was the strongest language to date Mr. Obama had used toward calls from his fellow Democrats for sweeping reforms to gun rights and, from both sides, for increased support for those suffering mental illness. The 20-year-old gunman, who turned the gun on himself when approached by police after killing his mother, six faculty members, and 20 students aged six and seven, is thought to have suffered from various mental disabilities.

Vowing to flood the following weeks with meetings with mental health professionals, parents, and others who may shed light "in an effort at preventing more tragedies like this," Mr. Obama asked, "What choice do we have? We can't accept events like this as routine." If lawmakers have at their disposal the ability to save at least one more school, or even family, from this level of grief, he continued, "surely we have an obligation to try."

"We will be told that the causes of such violence are complex, and that is true... but that's no excuse for inaction," the president said, mourning victims who "much of the time, their only fault was being in the wrong place at the wrong time. We can't tolerate this anymore. These tragedies must end."

Stepping into a metropolitan area already scarred by the 1999 shooting at Columbine High School, President Obama last July met with victims of a mass shooting at a movie theater in Aurora, Colo. - just outside Denver - that left 12 people dead and 58 others injured.

Accompanied by Gov. John Hickenlooper, Aurora Mayor Steve Hogan and other local officials, the president spoke to victims and victims' families at the University of Colorado Hospital in Aurora, where 23 of the victims were taken in the aftermath of the shooting.

"I confessed to them that words are always inadequate," Mr. Obama said, following the meeting, but added that his "main task was to serve as a representative of the entire country and we think of them at this moment and we will continue to think of them each and every day."

Particularly moved by the story of survivors Allie Young, a 19-year-old who was shot in the neck, and her best friend Stephanie Davies, 21, who saved Young's life by applying pressure to the wound as bullets flew, the president said after his meetings they "represent what's best in us." He said he assured survivors "that this perpetrator has received a lot of attention," but that it "will fade away."

"In the end," he continued, "what will be remembered are the good people who were impacted by this tragedy."

In a vigil themed "Together We Thrive: Tucson and America," President Obama in January 2011 addressed the country after flying to Arizona to visit Rep. Gabrielle Giffords, D-Ariz., who against the odds survived a bullet to her head during an assassination attempt. The shooting, at a "Congress on Your Corner" event in a Safeway parking lot, killed six and seriously injured 13 others.

"Our hearts are broken - and yet, our hearts also have reason for fullness," the president, accompanied by the first lady, said at the vigil. To cheers, he added, "Gabby opened her eyes for the first time" - an unscripted report offering a glimmer of miracle to a mourning people.

"There is nothing I can say that will fill the sudden hole torn in your hearts," Mr. Obama said. "But know this: the hopes of a nation are here tonight. We mourn with you for the fallen. We join you in your grief. And we add our faith to yours that Representative Gabrielle Giffords and the other living victims of this tragedy pull through."

Of nine-year-old Christina Taylor Green, who harbored political ambitions but was killed in the massacre, the president said: "I want us to live up to her expectations. I want our democracy to be as good as she imagined it. All of us - we should do everything we can to make sure this country lives up to our children's expectations."

Mr. Obama closed with: "May God bless and keep those we've lost in restful and eternal peace. May He love and watch over the survivors. And may He bless the United States of America."