DALLAS (CBSDFW.COM/AP) - An engine on an Spirit Airlines jet, bound for Atlanta from DFW Airport, where passengers said they heard an explosion and saw flames sustained an especially serious type of failure, a National Transportation Safety Board official said Wednesday.

The official told The Associated Press that it was an "uncontained" engine failure, meaning broken pieces and parts of the engine escaped the outer engine housing. The official spoke on condition of anonymity because he was not authorized to speak publicly.

The plane returned to Dallas-Fort Worth International Airport on Tuesday and landed safely.

Passenger Casey Rogers told CBS 11 the entire cabin filled with smoke.  Rogers exchanged eerie text messages with his wife who was on the ground, apparently under the impression the plan might crash.  Part of one message read, "...I love you make sure my kids know that forever.  We have a problem I [sic] the plane it's full of smoke [sic] the engine has stop and te [sic] whole plane is shaking ... I love you don't forget it!! Pray for me." 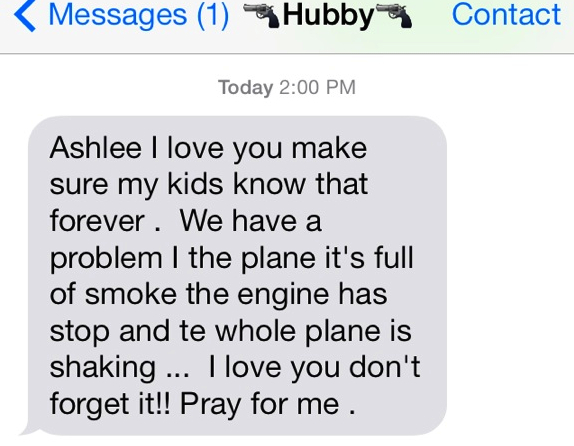 Spirit spokeswoman Misty Pinson said no injuries were reported. She said the captain received an indication of a "possible mechanical issue" shortly after takeoff from the Dallas-Fort Worth airport. She said by email Wednesday that there was no fire, before adding later that Spirit is "actively investigating to confirm the specifics of what happened and the cause."

The passengers were placed on another Spirit jet for Atlanta later Tuesday.

Aircraft engines are designed to contain any broken pieces within the engine during a failure. That's because when parts are released, they often spray like shrapnel and cause severe damage to fuel lines, electrical cables, hydraulic lines and other critical aircraft systems. Airliners are capable of safely flying with only one engine if the other engine breaks down or has to be shut off, but damage from an uncontained engine failure can jeopardize the plane.

Despite the government shutdown, NTSB is recalling furloughed investigators to open an investigation of the incident, the agency official said.

(©2013 CBS Local Media, a division of CBS Radio Inc. All Rights Reserved. This material may not be published, broadcast, rewritten, or redistributed. The Associated Press contributed to this report.)