While many Americans love to dash through the snow during the holidays, others prefer to bask in brilliant sunshine and warmer weather. In fact, most residents living in a tropical climate wouldn't have it any other way, opting for a surfing Santa instead of urging Santa to let it snow. Christmas may be fast approaching, but it's never too late to book a trip where the streets are dry, the temperature's high and the water's warm. The following are five of the best locations in America for a tropical Christmas.

With December temperatures averaging in the mid-70s, Hawaii's state capital has long been a favorite destination to escape the wintery conditions that envelop most of the "mainland" around Christmastime. Holiday celebrations in Honolulu commence on the first Saturday in December, with the very popular Honolulu City Lights celebration, featuring the dazzling Public Works Electric Light Parade, local marching bands, city leaders, corporate sponsors and Santa himself. The event culminates with the lighting of Honolulu's enormous 50-foot Christmas tree at the Honolulu Hale, which will be illuminated nightly through the holidays. Also on display at the municipal building is the well-known barefoot Shaka Santa sculpture, flashing a classic "hang loose" hand gesture that's known all over the world. Christmas celebrations will continue through December, with a dazzling spectrum of holiday lights adorning trees and buildings in downtown Honolulu, the Festival of Lights Christmas Boat Parade near Diamond Head and an assortment of Christmas luaus at some of Waikiki's finest resort hotels. 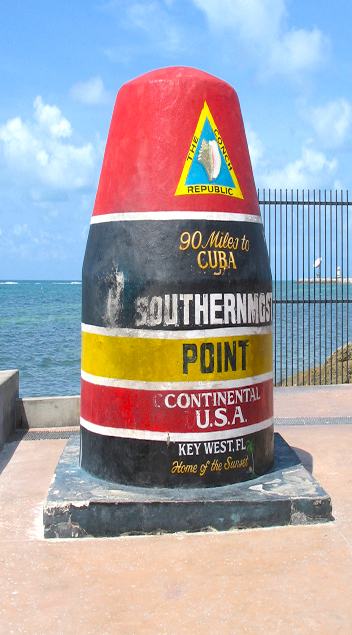 A visit to Key West is all but certain to guarantee a summer-like Christmas in the southernmost city of the continental U.S. Holiday festivities kick off during the first week of December with the Key West Christmas Parade, but events will continue to run through December, notably the Key West "Bight" Before Christmas at historic Key West Marina. However, water sports such as sailing, snorkeling and fishing are also a big draw to this seaport destination just 90 miles off the coast of Cuba. Holiday visitors may also wish to visit Ernest Hemingway's former residence, the Harry Truman Little Whitehouse and the concrete buoy marker at Southernmost Point.

Related: Most Relaxing Resorts In The United States

Home to the world's most famous Ironman triathlon on the Island of Hawaii, Kona is even warmer than Honolulu in December, with average lows in the 70s. Yet despite the tropical Savannah climate close to shore, some hearty individuals can make the trek up to the snow-peaked Mauna Kea volcano for skiing or snowboarding. The biggest Christmas celebration is the Kailua-Kona Christmas parade in mid-December at the historic Kailua Village, with Saint Nick wishing everyone a very "Mele Kalikimaka." Other holiday events include a free holiday concert at the Old Kona Airport Pavilion on December 22, a Christmas Eve celebration at Living Stones Church and a Christmas Eve candlelight service at Mokuaikaua Church, Hawaii's first Christian church.

Voted the world's best island for the past 20 years by Condé Nast, Maui is clearly one of the country's best destinations for a tropical Christmas. One of the biggest holiday events on Maui is held in the beginning of December with the annual Lighting of the Banyan Tree in downtown Lahaina. Located on the former site, the 66-foot Banyan Tree is the largest of its kind in the Hawaiian Islands and will remain lit each night through December. On December 22, Santa and his "reindeer" will arrive onto Kaanapali Beach by traditional Hawaiian outrigger to greet anxious children hoping to share their Christmas wish list. While several notable restaurants will be open for Christmas dinner, including the fabulous Grand Wailea Resort and Kaanapali Beach Hotel, the Pacific Whale Foundation offers two-hour cruises for Christmas brunch and dinner, highlighting some of the most breathtaking views of Maui, while enjoying live traditional Hawaiian music.

Orlando is an excellent tropical destination and not just for families with children. But, kids will especially enjoy the spectacular events at Orlando's two largest theme parks. Walt Disney World hosts Mickey's Very Merry Christmas Party, with a delightful holiday parade, a phenomenal fireworks display and many of Disney's most famous crowd-pleasing characters, such as Mickey Mouse, Goofy and Donald Duck. Not to be outdone, Universal Orlando has its own Macy's Holiday Parade through January 4, with many of the massive balloons and floats from this year's enormous Macy's Thanksgiving Parade in New York City. While the most extraordinary events are at most popular theme parks, there are plenty of other attractions to enjoy, including Christmas at Gaylord Palms, with its 54-foot Christmas tree amid more than two million lights. Additionally, there is the very popular Light Up UCF on the University of Central Florida campus, offering ice skating, a film festival, a holiday light show and musical, carnival rides and for those who might enjoy a bit of winter in summer-like conditions, a snow mountain for sled rides.