(CBS4) -- A Colorado man being investigated for his role in the Jan. 6 takeover of the U.S. Capitol faces sanctions and possible arrest for shooting and killing a mountain lion in the foothills southwest of Denver.

Littleton resident Patrick Montgomery was arrested in Colorado Jan. 17 following a federal indictment. Federal prosecutors allege he was an active member of the group which forced its way past Capitol security officers and interrupted the confirmation of the 2020 presidential election.

Montgomery has been in Colorado on conditional pre-trial release since then.

Friday, a U.S. District Court judge in Washington D.C. granted the request. Montgomery has until 2 p.m. Monday to turn himself in to Colorado authorities.

However, the judge indicated that Montgomery's defense plans to meet with prosecutors earlier that day. The two sides are expected to approve new conditions for Montgomery, negating the need for his arrest. Those new conditions include 24-hour home confinement, GPS monitoring, and prohibitions from possessing a firearm or hunting, according to court documents.

Federal prosecutors wrote that Montgomery shot and killed a mountain lion at a state park near Sedalia on March 31. He used a .357-caliber handgun, as determined by Colorado Parks & Wildlife personnel who responded to Montgomery's call reporting the kill.

Montgomery, according to the prosecution's motion, is a convicted felon who is not allowed to possess a firearm.

The motion included the CPW's report as an exhibit. That report stated Montgomery was convicted of three robbery counts in Dona Ana County and sentenced in 1996 to six years in the New Mexico Department of Corrections.

Online criminal records do not show any felony case ever registered against Montgomery in Colorado.

Montgomery told CPW investigators he had been granted a plea agreement from the courts that allowed him to possess firearms for the purposes of hunting and guiding. He and his attorney were unable, however, to provide documentation of such permission, the report stated.

Montgomery owns a hunting guide business called Pmonte Outdoors. On the business's website, he claims to be involved in hunting and guiding in Colorado since 2001.

Montgomery and a companion both shot the mountain lion twice, according to the CPW report.

The report indicated Montgomery could face state charges of Illegal Possession of Wildlife and Possession of a Weapon by a Previous Offender. The latter is a felony.

A CPW spokesman would not comment on the case, but did confirm to CBS4 that March 31st, the day Montgomery shot the cat, was the last day of the 2020-21 mountain lion hunting season. 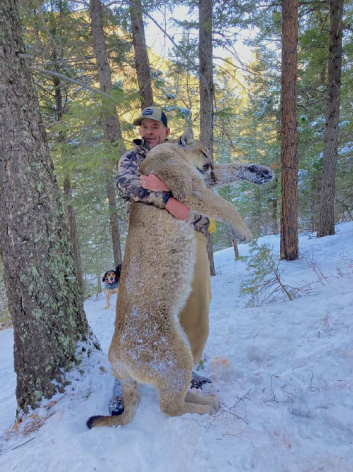 Meanwhile, federal prosecutors also referenced in their motion another hunting incident which occurred less than a week after Montgomery's federal arrest in January.  Montgomery contacted CPW regarding a bobcat carcass.

Online criminal records do show a CPW court case in Douglas County in which Montgomery was charged with Illegal Taking of Wildlife and Illegal Possession of Wildlife, both misdemeanors. The offense occurred on the 23rd of January, documents state. Montgomery is scheduled for a hearing on May 19 in that case.

"Montgomery has no respect for the Court's orders, just like he had no respect for law enforcement at the Capitol on January 6," the prosecutors' motion concludes. "Instead of peacefully protesting, he tried to grab a Metropolitan Police Department officer's baton, wrestled him to the ground for it, and then kicked the officer in the chest while wearing a boot. After the officer regained control of his baton, Montgomery stood up, and held up his two middle fingers at the officer."

Montgomery faces 15 counts in the Capitol case. The charges include disorderly conduct, assault, tampering with a witness, violent entry, and entry/remaining in a restricted building.

No other hearings beyond Monday's are scheduled in the federal case.

CBS4 attempted to contact Montgomery on Saturday but the only cell phone shown by online public records to be registered to him was disconnected.

CBS4 also reached out to Montgomery's public defender in the case late Saturday afternoon. This story will be updated with any response.