Here are a few things to know about this season's schedule:

The Hawks will be on national TV 8 times this season -- twice on TNT and six times on ESPN.  They're also slated for 9 NBA TV broadcasts.

The Hawks have 19 back-to-backs this season, down from the previous two seasons when they had 20+.  Six of those 19 occurances come in November, the most of any month.  Of the 19 back-to-backs, only 16 will require travel -- the Hawks stay home for two of them and have one against the Los Angeles teams.  They have two instances of 4 games in 5 nights, including one instance sandwiched around Thanksgiving.  Their two "4-in-5-night" stretches is a league-high.

The Hawks have 17 games in November making it the busiest month for Atlanta.  January and March will also be tough, as the Hawks have 10 road games in each month.

The Hawks have 4 "home-and-home" occurances (playing the same team two games in a row, once on each team's floor).  They'll dive right into one of these occurances before the end of October against the Charlotte Hornets in the third and fourth games of the season.  They also play the Knicks, Magic and Wizards in home-and-home scenarios.

The Hawks will travel 42,933 miles this season.

The Hawks make their usual two trips out west.  This year they have a 4-game trip in January and a 5-game trip in March, though the end of that latter trip involves a quirk.  More on that below.

The Hawks' longest homestand of the season is a 5-game stretch between Feb. 19 and Feb. 28.  What's especially nice for Atlanta is that they'll have a 9-day All-Star break right before that, giving them 18 straight days without travel.

The Hawks don't play on Halloween, Thanksgiving, Christmas, New Year's Day or Valentine's Day.  They do have three home games the week of the Christmas holiday and are in the middle of a 4-in-5-night stretch over Thanksgiving.  Their annual MLK Day game is against Orlando on Jan. 18 at 5 p.m.

A minor inconvenience to teams traving to Toronto is going through customs, which takes some time and requires extra paperwork.  The Hawks make two trips north of the border this season, and both come at the end of road trips of 3+ games.  The first trip is especially unusual, as it comes after 4 games out west.

The NBA has three teams in Texas, each of which the Hawks play once on the road every year.  This season the Hawks will play all three games in Texas over a one month span but will have to travel to the Lone Star State in three separate trips.  Not ideal.

It won't take long for several Hawks to be reunited with their former teams.  Tim Hardaway Jr. will be back in the Garden to face his old Knicks team before the calendar turns to November.  Tiago Splitter will meet up with his Spurs mates in San Antonio the day after Thanksgiving.  And Justin Holiday travels back to Oakland to see the Warriors on March 1.  Hawks fans also get a chance to welcome back DeMarre Carroll on Dec. 2.

Like pictures instead? Check out the cool infographic the Hawks just put out! 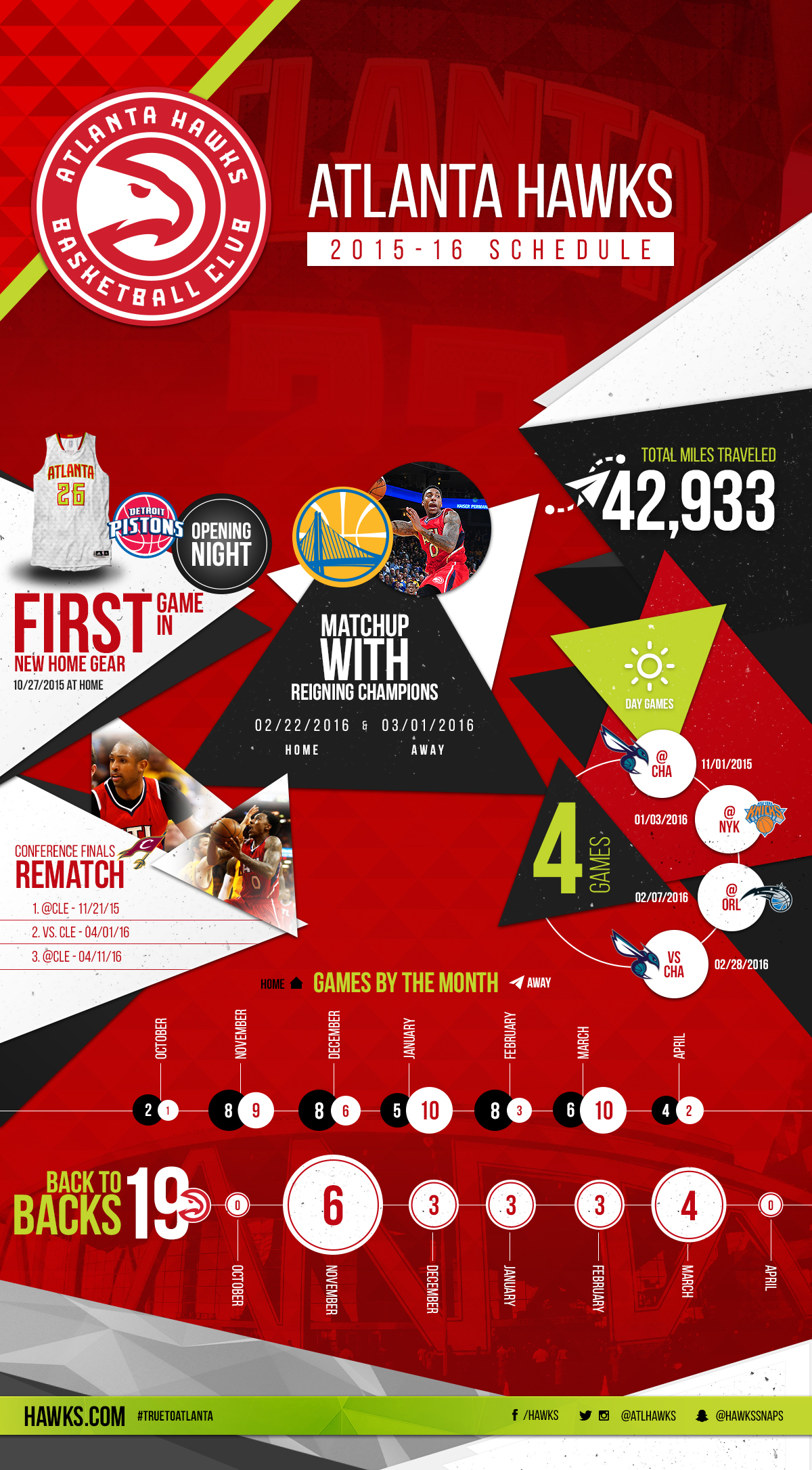