Week 1 of the college football season is in the books and with that comes the massive overreactions and predictions based on the first real games that we've seen since January.  It's a tradition at this point to look at a Top 5-10 team after Week 1 and declare them to be overrated and have no shot at the title.  Or to look at a fringe Top 25 team and say that their season is over because of the first loss of the year.

If there's anything that's been learned over the years, it's this: Don't base your assumptions based off of one game.  Let's take a look at some of the overreactions following Week 1 and try to talk some fans off the ledge while reeling some back to reality. 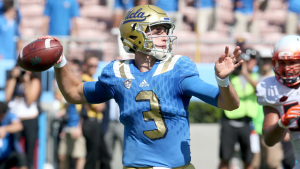 Prime example of this is what's going on out west after freshman sensation Josh Rosen made his first start at QB for UCLA against Virginia on Saturday afternoon. Rosen was fantastic going 28 of 35 for 351 yards and 3 TD's against the Cavaliers. He looked to be everything that the hype said he is.

That said, it's a little early to put the freshman atop the Heisman watch list. I understand it was a great performance, and Virginia is a Power 5 foe, but it's one game and we don't know how good Virginia's D actually is.  They were expected to be solid sure, but does that mean anything? Nope.

Rosen looked very good, but as a true freshman there are bound to be a few bumps in the road. As for the Bruins national title hopes, they very well could emerge from the Pac-12 South an get to the playoff. But, the South is a gauntlet and the Bruins have to hit the road against Arizona, Utah and USC all of whom are in the South with them.

TCU isn't as good as expected 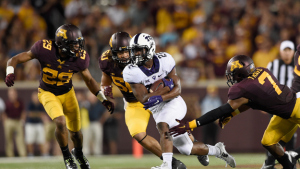 This is my favorite one because it started to happen the second the Horned Frogs didn't blow Minnesota out from the jump. Boykin didn't look great, he missed some open receivers. The offense wasn't as explosive. All true, but you're talking about a Minnesota team with a very good secondary and one that in the last two years have lost just 3 games at home and last year lost by just 7 to Ohio State at home.

The momentum swing will be fun to watch considering that TCU doesn't have another game that will test them until playing at Kansas State on October 10 (sorry Red Raiders and Longhorns fans). The Top 25 has even dropped TCU a spot despite winning the game. I know Alabama's result was more impressive but are we even sure Wisconsin is good? Starting to see the futility of taking season long lessons out of Week 1 yet? 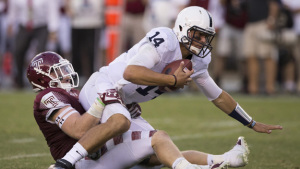 That was fast. We went from some folks projecting Hackenberg as the #1 pick, to now saying he may still go #1 overall despite being a bad quarterback.  Granted, 11-25 for 103 yards while taking 10 sacks against Temple (not exactly a noted football power) looks terrible.  Here's what I'll say in Hackenberg's defense. I was at that game on Saturday and his line was like a sieve. Very rarely did he seem to have more than a second and a half to throw.

The gameplan was also strange for Penn State. If you're O-line struggles in pass protection, run the football. It's not as if Akeel Lynch was ineffective. He had 10 carries for 78 yards which, last time I checked works out to about 7.8 yards per carry. A large amount of that came on a 42 yard TD, true. But even taking that out he had 9 carries for 36 yards which works out to 4 yards per carry. With a young O-line, building confidence seems to be the main idea and just allowing an experienced Owls defensive line to pin their ears back continuously seems like a bad choice. Maybe that's just me.

Also, you have to credit the Owls. They hadn't won in their last 39 tries against Penn State and the last win was 74 years ago.  Think they were playing for something with an experience laden group of juniors and seniors? Now, if Hackenberg has a terrible game this week against Buffalo? I'll be closer to hopping on board this train.

The bottom line is folks, it's only Week 1. Let's remember that after TWO weeks last year we had already counted out the national champs (following Ohio State's loss to VT), Kenny "Trill" Hill had inserted himself into the Heisman conversation after throwing for 794 yards, 7 TD's and 0 INT's while completing 70% of his passes in A&M's first two games, and Oklahoma was ranked #4 in the country. We all know what happened. Ohio State rolled through its schedule and won the title, Hill got benched for Kyle Allen and has since transferred to TCU, and Oklahoma went 6-5 over it's last 11 games including a 40-6 beat down at the hands of Clemson in the Russell Athletic Bowl.

Each week I'll give you a couple of games that you shouldn't miss for the upcoming weekend based on CFP implications, intriguing match-ups, or rivalry games. Week 2 only has two that I'm hyper focused on.

Neither team had what you would call a testing match-up in Week 1, though Bowling Green did put up 30 on the Volunteers, which is slightly concerning. This week you get to see these two teams start to make their case as contenders in their respective conferences.  Baker Mayfield and Joshua Dobbs both looked good in their first outings of 2015, which offers a very good QB duel element to this contest.

More impressive was Tennessee's rushing attack which put up 399 yards on the Falcons.  They'll face an Oklahoma defense that did give up 138 yards to the Zips last weekend albeit on 44 carries. Speaking of rushing attacks, Oklahoma sophomore stud Semaje Perine never got going last week, look for the Sooners to try and get him rolling this weekend.

Rematch of last year's game in which the Ducks laid the beat down on Sparty after halftime.  Vernon Adams the new QB for the Ducks was laid out with a concussion on a cheap shot from his former teammates in Week 1 so whether he plays or not will be a story line to watch. For all the talk Ohio State is getting (rightfully so) don't forget about the Spartans, they have a chance to impress in prime-time on Saturday night.

If you're looking for a late night option #14 LSU at #25 Mississippi State could be fun as it's the first time you'll see the Tigers this season after their game against McNeese State got cancelled due to inclement weather last weekend.

Ryan Mayer is an Associate Producer for CBS Local Sports. Ryan lives in NY but comes from Philly and life as a Philly sports fan has made him cynical. Anywhere sports are being discussed, that's where you'll find him. Agree/Disagree? Thoughts, comments, complaints? Email or tweet him.