Ok, let me preface this by saying that I am a huge Michael Vick fan.  I have Vick memorabilia in my home; I have followed his career from his days at Virginia Tech where he almost singlehandedly beat Florida State in the National Championship Game. 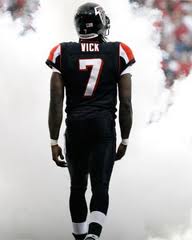 When he was drafted by the Falcons, he should have started from day one but when he got his opportunity he made the most of it.  His play was electrifying for most of the time that he was here in Atlanta.  He also won a lot of games here and took the Falcons to a playoff win on the frozen tundra of Lambeau Field when it was considered impossible along with an NFC Championship Game where they lost in Philadelphia.

Michael Vick was the toast of Atlanta and was arguably the most popular athlete since Deion Sanders to play for an Atlanta Franchise.

However, I am an Atlanta Falcons Fan first.  Since I moved down here in 2002 and again in 2007 from North Carolina the "Dirty Birds" have been my squad and I cannot excuse what he did for the franchise.  I am not judgmental of the action of dogfighting, as the "Good Book" says, that is not my job, but when you tell me that you did not give your all for my team…I have a problem!!!  Coaches were fired, personnel moves were made, and possible World Championships opportunities were squandered.  I see the play from a focused Michael Vick in Philadelphia and it makes me shake my head because it could have been like that here in Atlanta but maybe he had to go through jail time and bankruptcy to get him right.

I love a good redemption story like anyone else but for so many people to don the MV7 Philadelphia Jersey in the Georgia Dome and actually cheering while your team is getting beat, wow, "where they do that at??"  Now Michael Vick is coming back to Atlanta for the first time as a starting quarterback, I wonder what the Dome will look like.  If it has been true to form it will be half Falcons, half Philadelphia.

I will be cheering for Vick this season for much success but when it comes to playing my Birds, he will go down like any other opponent.

Get Caught Up On "What Everybody's Talking About" In The Sports Kingdom!!! Sports Kings Radio, Saturday & Sunday 12n-4p on 1380 WAOK(Atlanta) and waok.com Follow "The Kings" on Facebook.com/sportskingsatl and on Twitter @sportskings1380.