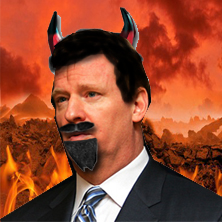 The pro bowler is quoted in next month's issue of "Men's Journal" magazine calling Goodell "stupid," a "crook" and a "devil."

The magazine hits the newsstands this week.

Get Caught Up On "What Everybody's Talking About" In The Sports Kingdom!!! Sports Kings Radio, Saturday & Sunday 12n-4p on 1380 WAOK(Atlanta) and waok.com Follow "The Kings" on Facebook.com/sportskingsatl and on Twitter @sportskings1380.