Carly (Cameron Diaz) discovers that her boyfriend is married when she shows up at his house to surprise him.  Kate (Leslie Mann) confronts Carly about the affair and they soon discover that Kate's husband (Nikolaj Coster-Waldau) is cheating not only on her but Carly as well with Amber (Kate Upton).  When another affair is discovered, the three women decide to get revenge on the cheating husband and make him pay for what he has done. "The Other Woman" Website

What to Watch For:  This is the biggest role that Supermodel Kate Upton has taken on.  Her previous roles were small parts in Tower Heist (2011) and The Three Stooges (2012).

Word on the Street: Critics are interested in seeing how director Nick Cassavetes handles a comedy, as he has always directed dramas.

My Take:   This could be Diaz's year as she has three high profile films coming out, including "Sex Tape" with Jason Segel, and playing the role of Miss Hannigan in "Annie."

In 1974, a University professor (Jared Harris) and three of his students attempt to prove that the paranormal doesn't exist.  They encounter a young woman (Olivia Cooke) who cannot remember her past.  The professor and his students decide to conduct experiments on the young woman…a decision that could cost them their lives. "The Quiet Ones" Website

What to Watch For:  The film is based on an experiment conducted in Canada, in the 1970's.

Word on the Street:  The film is produced by legendary horror studio,  Hammer films.  The past three films, "Let Me In" (2010), "The Resident" (2011), and "The Woman In Black" (2012) have been interesting films to watch, so the fans of horror films are hoping this one delivers.

My Take: This should be right in Olivia Cooke's wheelhouse.  She is a regular on the creepy TV drama, "Bates Motel."

Damien(Paul Walker), is an undercover Detroit cop,  is out to get revenge on a crime lord Alexander(RZA), who was responsible for killing his father.  He enlists an ex-con, Lino(David Belle) to help him take down  Alexander and his gang. "Brick Mansions" Website

What to Watch For: David Belle is the creator of  Parkour, which consists of moving quickly and efficiently in any environment, using only the abilities of the human body.  These techniques are used extensively in the film.

Word on the Street:  The film is said to be the late Paul Walker's most physical role he ever took.

My Take:  It's going to be sad to see Walker on the screen for one of the last times. 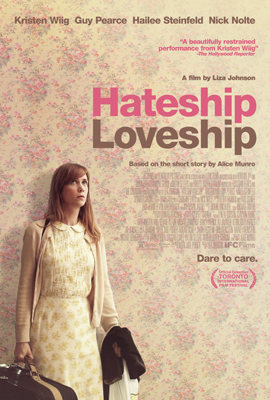 Sabitha (Hailee Steinfeld) is being raised by her grandfather (Nick Nolte) because her mother is dead and her estranged father(Guy Pearce) is a recovering drug addict. Johanna (Kristen Wiig) is hired to be Sabitha's nanny, which Sabitha doesn't like.  To get revenge, she sets up a dummy email, posing as her father and begins to write Johanna with the intention of breaking Johanna's heart. "Hateship Loveship" Website

What to Watch For:  It's going to be interesting to see how audiences react to Wiig in such a serious role.

Word on the Street:  This is another role that the Academy Award nominated actress, Hailee Steinfeld is getting raves for.

My Take:  I am anxious to see this film because it's directed by Liza Johnson, who directed one of my favorite films of 2011, "Return."

In Hungry during the final days of World War II, Elek (Jonas Armstrong), son of a Rabbi, helps save thousands of his fellow countrymen by posing as a Nazi officer.  Unfortunately, Elek was too late to save his own family. "Walking with the Enemy" Website

What to Watch For:  The film is hot off a special appearance at the 2014 Miami Jewish Film Festival.

Word on the Street:  Fans of British television are looking forward to this film.  Jonas Armstrong has done a number of TV shows in Britain, including the extremely popular "Robin Hood."

My Take:  I am surprised that the Atlanta Jewish Film Festival didn't show this film.

If you can't make it to the theatre this weekend, then stay at home and watch movies on CW69.

"My Best Friend's Wedding��  (1997)  When Julianne' s (Julia Roberts) longtime friend (Dermot Mulroney) says he is getting married, she plots a scheme to break up the wedding and marry him herself.

"Monster-in-Law" (2005)  Charlotte (Jennifer Lopez) has always had hard luck in the dating world, until she meets Kevin (Michael Vartan). He is perfect in every way, except for one problem, his mother (Jane Fonda).

"League of Extraordinary Gentleman" (2003)  In an alternate world, a group of legendary Sci-Fi and adventure characters goes on a mission to save the world.  The film stars Sean Connery as Allan Quatermain, Shane West as Tom Sawyer and Naseeruddin Shah as Captain Nemo.

"My Best Friend's Wedding" (1997)  When Julianne' s (Julia Roberts) longtime friend (Dermot Mulroney) says he is getting married, she plots a scheme to break up the wedding and marry him herself.