Michelle Darnell (Melissa McCarthy) was on top of the world, richer than almost anyone until she was convicted of insider trading. After spending time in the pen, she gets released and stays with her former assistant (Kristen Bell) in an effort to rebrand herself. "The Boss" Website

What to Watch For:  The movie was filmed in Atlanta area locations including Agnes Scott College, Crescent Avenue in Midtown, Glenwood Park, and the Buckhead Loop area.

Word on the Street:  The film is based on a character that Melissa McCarthy created while working with the Improv group, the Groundlings.

My Take:  Any film with Kristen Bell and Peter Dinklage is a movie I am going to see.

The film is a first person action film in which the audience is the main character.  Henry is a cyber-solider who is trying to rescue his wife from an evil warlord. "Hardcore Henry" Website

What to Watch For:  The film was shot almost entirely on a GoPro Hero 3 camera to create the first person perspective.

Word on the Street:  The film has wowed audiences at both the 2015 Toronto International Film Festival and the 2016 SXSW Film Festival.

My Take:  The film is getting great reviews, sitting at 89 percent on Rotten Tomatoes.

Davis (Jake Gyllenhaal) has it all. He is a successful investment banker with a beautiful wife and a great home. It all goes away when his wife is killed in a car crash. Now he has to figure out how to put the pieces of his life back together. "Demolition" Website

Word on the Street:  The film won the Headliners Audience Award at the 2016 SXSW Film Festival.

My Take:  I hear that Naomi Watts as the possible love interest in the film is brilliant in the movie.

A young freshman pitcher (Blake Jenner) tries to fit in with his new college team before the start of the fall semester in 1981. "Everybody Wants Some!" Website

What to Watch For:  The film is a sort of sequel  to Richard Linklater's 1993 film, "Dazed and Confused."

Word on the Street:  Linklater had all the principal cast stay on his ranch outside of Austin, TX to work on the script.

My Take:  I can't wait to see what Linklater gives us with this film. 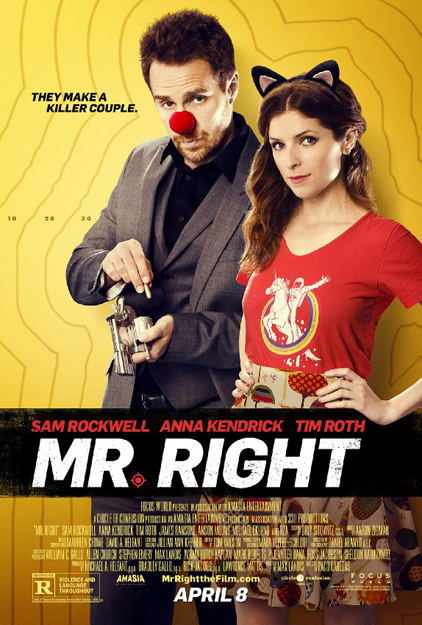 A girl (Anna Kendrick) falls for a guy (Sam Rockwell) who seems perfect for her.  He just has one flaw:  he is a hit-man on the run from a cartel. "Mr. Right" Website

What to Watch For: The film is by Max Landis who also wrote another SXSW film, "Me Him Her."

Word on the Street:  Rza is in the movie as Shotgun Steve, a hit-man for a rival gangster.

My Take:  All you have to say is Ann Kendrick, and I will see that film.

Ryder (Logan Miller) is a gay, Californian teenager who is visiting Nebraska for a family reunion. Because of the conservative nature of his relatives, his parents convince Ryder to stay in the closet. But a strange encounter places him at the center of a long-buried family secret. "Take Me to the River" Facebook Page

What to Watch For: The film was picked by the website Indiewire.com as one of ten American films to see at the 2015 Sundance Film Festival.

Word on the Street: Critics that have seen the film are raving about Ursula Parker's performance.

My Take: Actress Robin Weigert, who is in this movie, is someone that I enjoy watching up on the big screen.

If you can't make it to the theatre this weekend, then stay at home and watch films on Atlanta's CW.

"Look Who's Talking"  (1989)  Kirstie Alley and John Travolta star in this classic comedy about a single woman (Alley) who has a baby with a married man. The child (voiced by Bruce Willis) narrates the film as his mom slowly falls for the cab-driving James (Travolta).

"Just Married" (2003)  While on their honeymoon, newlyweds (Ashton Kutcher, Brittany Murphy) face a series of obstacles that test their love for each other, including her ex-boyfriend's desire to end the marriage.

"The Thing About My Folks" (2005)  An aging father (Peter Falk) shows up at his son's (Paul Reiser) house after his wife of many years leaves him, and they go on a road trip that turns into a voyage of discovery.

"Look Who's Talking"  (1989)  Kirstie Alley and John Travolta star in this classic comedy about a single woman (Alley) who has a baby with a married man. The child (voiced by Bruce Willis) narrates the film as his mom slowly falls for the cab-driving James (Travolta).